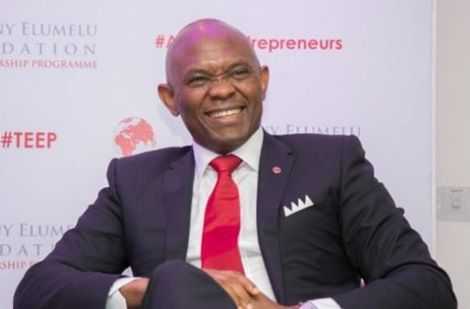 The high level presidential dialogue brought participants from around the world and African influencers to discuss how Africa can create wealth to fund African initiatives including trade.

Speaking as part of a high level presidential panel organized by the UNDP Africa on the theme; Africa’s money for African Development – A future beyond aid, Mr. Elumelu noted that, investment in other areas of African economy like power was a business investment and would contribute to the growth of the countries but an investment in young Africans would create prosperity for all. The chairman of Heirs Holdings added that the success of the private sector was success for all as it impacts a larger society.

Mr. Elumelu pointed out that the Africa beyond aid agenda was at the heart of the Africapitalism concept which he continued to champion over the last few decades. “We in the African private sector must wake up, recognize and embrace our role in driving the economic growth and the social development of Africa and we must act on that responsibility in tangible ways,” he added.

President Nana Akufo-Addo noted in his remarks that Africa beyond aid was not anti-Europe or America but, Africans must depend on each other in order to accelerate their growth. He further added that every country in its development would welcome foreign investments and therefore would not turn away such investments.

“Ghana beyond aid is not an initiative to be hostile to foreign investors. Our continent is the best endowed in the world, yet we are the most underdeveloped and this will have to change.

“I believe we can make Africa the prosperous and joyful place it should be. Our young people must see and feel the dividends of democratic development. Our success story and changed narrative would come with building economies that are not dependent on charity and handouts. Africa, I am confident, will be a wealthy and dynamic member of the global community, making her own unique contribution to the growth of world civilization,” he concluded.

Tony Elumelu is the Chairman of UBA Plc, a Pan-African Bank currently operating in 20 African countries including UBA Ghana.