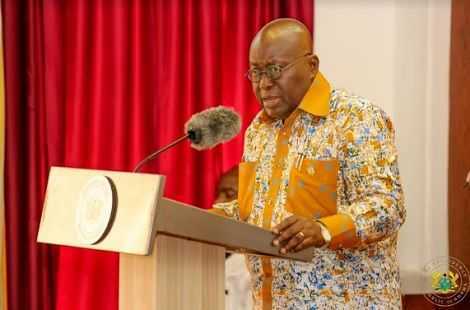 President Akufo-Addo has commissioned a three (3) kilometre road stretching from school junction to Otanor at Adjiriganor, within the Adentan Municipality as part of day two of his three-day tour of the Greater Accra Region.

The 51 million Ghana cedis road project is a Ministry of Roads and Highways project which was executed through the Ministry’s implementing agency - the Department of Urban Roads.

The construction was part of the overarching efforts by the Ministry of Roads and Highways to improve mobility, safety and travel time within the Greater Accra Region. Oswal Investments Limited, General Contractors and civil engineers carried out the entire construction of same.

The Otano Junction to School Junction road is located at Adjiriganor, within the Adentan Municipality. The community is one of the fastest-growing areas in Greater Accra and the road has a projected Average Daily Traffic of about thirty thousand (30,000) vehicles and there are several businesses, schools and hospital facilities along the road Corridor who all stand to benefit from the now-completed project.

The road was a two-lane single carriageway at the onset of construction. The surface condition was poor with numerous potholes that increased travel time and inconvenienced many road users.

The drainage condition was equally poor, which contributed to the rapid deterioration of the road. There were reports of occasional flooding during heavy downpours on the road as well.

The road has been reconstructed into a four-lane dual carriageway to increase the capacity. Furthermore, the drainage situation has also been improved with the construction of several culverts and concrete U-drains.

Additionally, the surface condition has been upgraded from a surfaced dressed road into an asphaltic concrete. The project was completed six (6) months ahead of schedule.

Alhaji Awolu Abass, the Director Urban Roads in his presentation to the President on the project as has been executed, indicated that the contractors, Oswal Investments Limited, an indigenous Ghanaian company has been diligent and very focused throughout the project life cycle. He commended them for good work done.