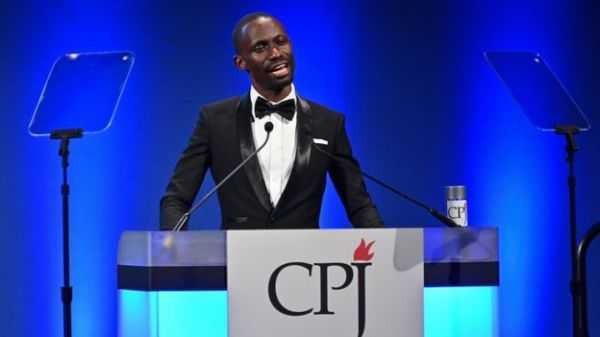 Tanzania's Maxence Melo, the winner of last year's International Press Freedom Award, never set out to be a journalist.

Sixteen years ago, he co-founded Jamii Forums, a website that exposed corruption and helped push for political accountability - as an alternative to the mainstream news outlets.

It won him global acclaim, for representing the best of journalism. But in the last three years, he has been to court 137 times and has been detained overnight for his work.

It has not been easy: "It's tiresome, I have to be honest, it's tiresome, and there are times you feel like giving up," he told the BBC's Sammy Awami in December.

Trained as a civil engineer, Mr Melo calls himself an "accidental journalist."

He started the citizen journalism and whistle-blowing website Jamii Forums in 2003, where citizens engaged in free discussions on issues facing the country.

The website became popular, and its success in its mission seemed to have rankled with the government.

Mr Melo was in 2008 arrested on accusations of terrorism, though the charges were dropped. But it didn't end there.

The Cybercrimes Law (2015) and the Electronic and Postal Communications Act (2010) have been used to censor and limit criticism of the government, according to the Committee to Protect Journalists (CPJ).

The Cybercrimes Law (2015) and the Electronic and Postal Communications Act (2010) have been used to censor and limit criticism of the government, according to the Committee to Protect Journalists (CPJ).

Journalists, media outlets and other players have fallen victims of these laws.

The Tanzania Editors' Forum noted in 2018 that at least five newspapers and two radio stations had been suspended for between three and 36 months.

Freelance journalist Erick Kabendera's arrest in July 2019, initially on questions over his citizenship, which later changed to money-laundering charges, drew international condemnation. His court case has faced a series of delays and he has been in detention ever since.

Tito Magoti, 26, spent the festive period in remand after being arrested by authorities on 20 December in the main city, Dar es Salaam.

In 2016, Mr Melo was charged under the same Cybercrimes Law. He was accused of obstructing an investigation when he refused to hand over the details of people who post on the website.

Jamii Forums was shut down for 21 days in 2018, forced to comply with harsh new online content regulations.

Despite the brushes with the authorities, facing legal actions and intimidation, Mr Melo has remained undeterred - and has also found acclaim.

He told the BBC that since the shutdown last year, they have had to hire multiple lawyers, redo their editorial policy and hire more people to check all contributions on the website before they are published.

"We have a team of 18 lawyers. We had to rethink, restrategise, we had to welcome the University of Stanford to review our strategies, to review our operations and advise on better ways of doing our work," he said.

"Initially people were free, people could talk, you could do a little kind of editing of the comments they post on the forum.

"You could [make a] call to some civil servants and even politicians and they could comment on something. But at the moment such possibilities are no longer available," he told the BBC.

He says that they have to get the lawyers to speak to sources to assure them of their security or privacy when they get attacked in any way for their contributions.

He laments about the "shrinking" media space amid a significant drop in Tanzania's freedom of the press ranking.

In last year's World Press Freedom Index published by Reporters Without Borders (RSF), the country dropped 25 places - to 118 in the world.

"No other country in the world has experienced such a drastic decline in press freedom in the past four years," the head of RSF's Africa desk, Arnaud Froger, noted.

"Silence or persecution seems to be the only alternative for media outlets and journalists that want to exercise a critical role in Tanzania."

The government insists there is freedom of expression in the country - and says journalists and commentators are free to do their job unless they commit a crime.

The Jamii Forums co-founder says that in his daily operations, he now has to consider the multiple agencies that regulate the media in Tanzania and his organisation has to review what they publish more than five times.

"We have the TCRA [Tanzania Communications Regulatory Authority], the police, the board for the media - you have even the regulations themselves for the online platforms like Jamii Forums, the ministry of infrastructure…

"Also as part of the Cybercrimes Act, you find yourself in the middle of all these different organisations or institutions and we have to make sure that the kind of content we take to the public is fact-checked, reviewed to ensure it is in compliance with the country's laws."