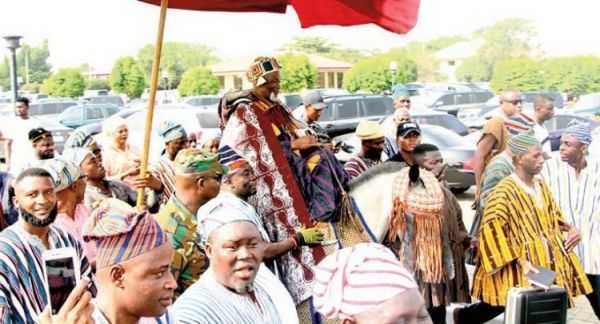 The chiefs and people of Dagbon led by their king, Ya Na Abukari Mahama II, visited President Nana Addo Dankwa Akufo-Addo at the Jubilee House (Presidency) on Thursday in Accra.

It was the first time in history that a Dagbon king visited a President at the seat of government.

The visit came on the heels of the restoration of peace after a two-decade chieftaincy dispute.

The traditional pomp and pageantry of Dagbon and its culture were in full display when the king arrived at the Jubilee House on horseback as the drummers and praise singers displayed their skills.

The accompanying entourage, including the Yoo Naa previously the Kampukkuyya Naa and the Mion Lana who was the Bolin-Lana—both grandsons of the Ya Na—was a perfect way of telling the world that finally, peace has returned to Dagbon.

The Ya Na’s visit was to thank the President for his effort in bringing lasting peace to Dagbon through the Committee of Eminent Chiefs led by the Otumfuo who could not make it to the event following the death of his kinsman and former Metropolitan Chief Executive of Kumasi, Nana Akwasi Agyeman.

In a speech, the Ya Na reiterated his promise to spend the rest of his life working towards strengthening the peace of Dagbon by ensuring fair and equitable access to traditional skins and resources of the traditional area.

He, therefore, appealed to government to help sustain the peace that has been achieved in Dagbon by shunning unscrupulous persons who may engage in activities that could reverse the favourable climate.

The Ya Na could not go without extending a heartfelt gratitude to the Otumfuo-led Committee of Eminent Chiefs and his staff for the tireless efforts they made to bring about the peace to the area, whilst thanking various individuals, group of persons and institutions who helped in diverse ways to achieve that.

He, however, appealed to the President to help bring to an end what he described as the unwarranted usurpation of the Nanton town by the Zoosal-Lana Haruna, an act he said was undermining the relative peace in Dagbon.

President Akufo-Addo used the occasion to, once again, on behalf of the government and people of Ghana thank the Committee of Eminent Chiefs for not giving up on the people of Dagbon even when at the time the situation seemed hopeless.

“Their display of tenacity, patience, statesmanship and patriotism is worthy of emulation by all and I’m certain that posterity will continue to applaud their efforts,” he said.

He indicated government’s determination to exploit and add value to the iron deposits.

The President also pledged his commitment to finish the second phase of the Tamale Airport project, construct the Tamale interchange (the first of its kind in the northern sector of the country), to see to the completion of the Tamale Hospital, upgrade the Yendi Hospital to a befitting status, promote the sustainable development of agriculture in the area and will soon commence the Yendi water project.

“The fruits of this development can only be appreciated by the people of Dagbon if the peace being enjoyed there is nurtured and maintained and if chieftaincy disputes are not allowed to become a part of the fabric of the great state of Dagbon or any part of our country. Development can never take place in an atmosphere of confusion and chaos,” he added.

He thanked the Dagbon king for giving him the title Dagbon Malti Na Abudani I.