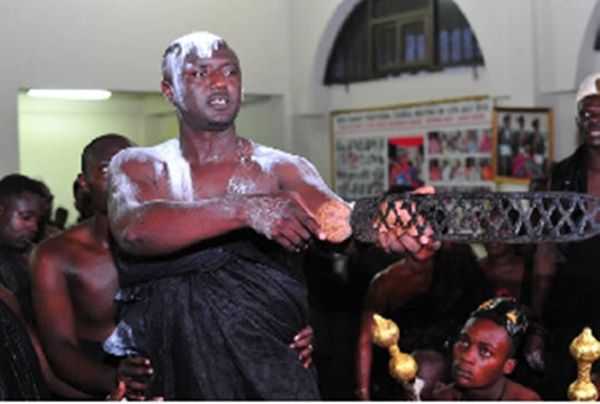 Nana Yaw Sarpong, a businessman and royal of New Juaben has been enstooled Akyempemhene and Leader of the youth of the New Juaben Traditional Area.

The appointment, which was made by the Omanhene of New Juaben Traditional Area, Daasebre Prof. (Emeritus) Oti Boateng, was unanimously endorsed by the Traditional Council at its meeting on 24th January 2020.

The swearing of Oath of allegiance and enstoolment which took place at the Omanhene’s Palace in Koforidua was attended by dignitaries from all walks of life.

All the Chiefs who spoke at the brief but colourful event expressed their gratitude to the Daasebre for accepting and appointing Nana Yaw Sarpong who they described as a gem.

They were of the view that his presence would definitely make a significant impact on the youth in the area, as they believe he wields a great level of influence in society.

The new chief thanked the Omanhene for the honour done him and assured him that he would take his advice to help him play his chieftaincy role effectively.

He also thanked the chiefs and kingmakers, as well as other chiefs in the area, for their collaboration.

He noted that educating the youth was one of the major concerns of Daasebre’s developmental agenda and therefore pledged to use his acquired skills to promote the development of education in the area.