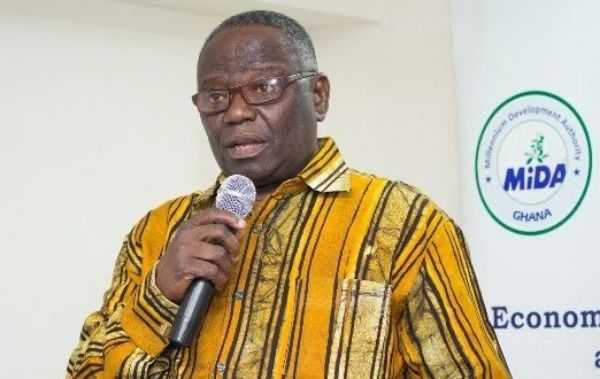 The Management of the Millennium Development Authority (MiDA) has indicated that it is committed to completing and inaugurating all prioritised projects under the Millennium Challenge Account (MCC) grant in the next one year and six months, using funds available before the cancellation of the power compact.

MiDA said it now had $308.2 million available for it under the compact for the implementation of projects following the withdrawal of $190 million by the MCC and an additional counterpart fund of $23 million from the government.

This came to light when the management of MiDA interacted with some journalists in Accra yesterday.

The Chief Executive Officer (CEO) of MiDA, Mr Martin Eson-Benjamin, told the journalists that the remaining funds would be used to support investments in infrastructure and business-process-related projects that would enhance the operational efficiency of the Electricity Company of Ghana (ECG), cut commercial and technical losses, improve the ECG's finances and allow power to be distributed efficiently.

Part of the funds, he said, would be used to support the Energy Commission (EC) and the Ghana Standards Authority in the form of capacity upgrades to enable them to carry out labelling standards, energy auditing and equipment testing.

He said another tranche of the fund would go into the retrofitting of some public buildings at the University of Ghana, the Korle Bu Teaching Hospital and some ministries in Accra, to ensure efficient power consumption and lower electricity bills.

Additionally, Mr Eson-Benjamin said, there were plans to improve access to power in eight selected markets in the Greater Accra Region and two others in the Northern Region.


"MiDA is fully committed to meeting the aspirations of the compact, the expectations of the governments of Ghana and the United States of America, (USA), the fund providers," he said.

The Technical Controller of the Authority, Mr William Amuna, said given the limited period of time to the expiration of the compact, a number of projects were going to be rolled out in the coming days.

He said work was ongoing on the construction of the biggest power substation in the country, which was scheduled to be handed over to GRIDCo by the end of July this year.

Additionally, Mr Amuna said, contractors would soon start work on the second largest bulk supply point at Kasoa and substations at the University of Ghana to ensure reliable power supply to the new University of Ghana Teaching Hospital and the Noguchi Memorial Institute for Medical Research.

Another substation would be constructed at Kanda in Accra to ensure reliable power supply to the 37 Military Hospital and surrounding communities.

The technical controller indicated that the agency was also laying interconnection lines "which will have to pass through people's lands and business places, among others. We will have to block roads and take off power. We know it is an election year and when power goes off, it has implications, but we must understand that we will have to suffer to gain.

“We will sacrifice a little and in the end, we will have stable power supply," he emphasised.

Mr Amuna, therefore, urged the public to bear with the authority during such periods, giving an assurance that MiDA would do its best to manage the situation by giving enough notices to the public and ensure that work was done swiftly to lessen inconveniences.

The Ghana Power Compact II with the MCC was expected to end in 2021.

The compact is a direct support to the energy sector’s strategic objectives to achieve power supply efficiency, including exports to neighbouring countries as well as supplies to new oil and gas-based industries.

The programme objectives, under Compact II, are focused on developing projects and initiatives that will address the constraints to the supply of adequate and reliable power.

It has a private sector participation (PSP) as a precondition, which saw some entities taking over the management of ECG on concession for 35 years, during which the private partners were to invest significantly in the power distribution company.

However, on Tuesday, July 30, 2019, the government suspended the PSP arrangement, citing what it termed as the “detection of fundamental and material breaches of PDS’s obligation in the provision of Payment Securities (Demand Guarantees) for the transaction which were discovered upon further due diligence”.

“The demand guarantees were key prerequisites for the lease of assets on March 1, 2019 to secure the assets that were transferred to the concessionaire,” it said.

The Minister of Information, Mr Kojo Oppong Nkrumah, told journalists on August 1 last year that the government was taking steps to secure the second tranche of $190 million compact from the American government following the suspension of PDS operations.

Negotiations between the government and the USA fell through, leading to the cancellation of the PSP deal, thus reverting ECG to its status quo.

The suspension compelled the US government to withdraw the $190 million which was left to be committed to the power compact.