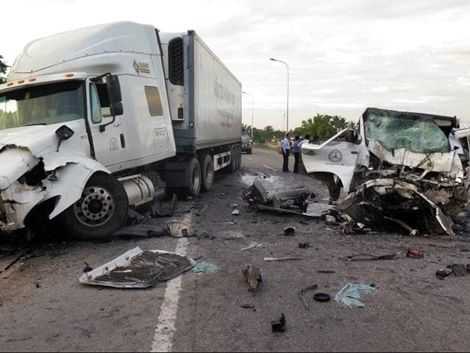 Nine people died and 51 sustained injuries in a ghastly accident at Monkra, a town on the Dambai - Kete Krachi, road in the Oti Region last Saturday when a cargo truck in which they were travelling hit an embankment and overturned.

The injured were rushed to the Krachi District Hospital for medical care.

The Kete Krachi District Police Commander, Deputy Superintendent of Police (DSP) Mr Kwabena Nkrumah, in an interview with the Daily Graphic, said the victims including some students were returning from a funeral at Osramani.

The police commander said the cargo truck with registration number AS -1016 N, was carrying many passengers  with some hanging on the sides of the vehicle.

He said the driver did not sustain any injuries so he was assisting the police in investigations.

“The accident involved a Rhino cargo truck conveying mourners from a funeral grounds to their hometown. When they got to the Monkra junction, the driver realised that there was a speed hump that he did not notice earlier, so he veered off the road and hit the gutter and the vehicle overturned,"he said.

DSP Nkrumah said three people died on the spot while 57 were sent to the hospital.

He said "as we speak, six have also died bringing the death toll to nine.”

The district commander added: “Some of the people have been admitted and are receiving treatment. Currently, there are 16 in critical condition and a female amputated, so in all 24 are in the hospital now”.

He said all the nine who died were males and cautioned drivers to abide by road regulations to prevent accidents.

This year has already seen a number of accidents with many casualties.

On Sunday January 2,  this year six people were reported dead after two vehicles crashed on the Accra-Tema motorway.

In one of the accidents, on  January 4, one person died and many injured when a cargo truck crashed a private car on the Nkawkaw-Abepotia stretch of the Accra — Kumasi Highway.

On January 13, an accident  involving  two buses, one traveling from Takoradi to Accra — and the other  in the opposite direction claimed 34 lives.

In another accident, on February 14, seven people were injured after being involved in a terrible accident at the Trede-Kentinkiren road in the Atwima Kwanwoma District of the Ashanti Region.