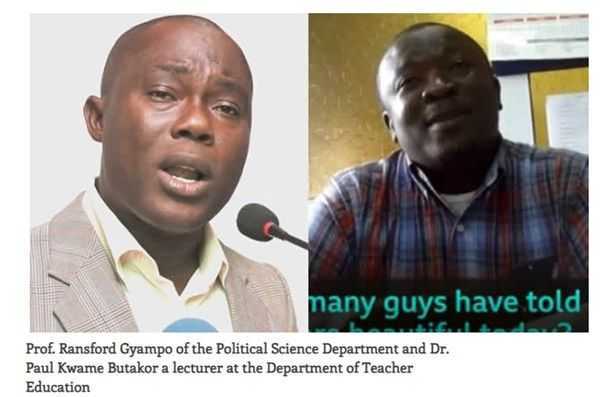 The University of Ghana has suspended two of its senior lecturers; Prof. Ransford Gyampo and Dr. Paul Butakor after completing investigations into the BBC’s Sex for Grades documentary.

”In line with statute 46(2) of the University of Ghana Statutes, as amended, and regulation 15.0 of the Code of Conduct for Academic Staff of the University of Ghana, the Disciplinary Committee recommended a six-month suspension without pay for Professor Gyampo and a four-month suspension without pay for Dr. Butakor. The suspensions take effect from January 1, 2020,” the statement said.

“They will be required to receive a positive assessment after the training before a resumption of their duties. They are also required to undergo annual assessment for a period of 5 years,” a statement added.

The two University of Ghana lecturers; Professor Ransford Gyampo and Dr. Paul Butakor who were alleged to have abused their positions in the BBC’s ‘sex for grades’ documentary.

Both lecturers were interdicted by the university following the release of the documentary.

A fact-finding committee set up to investigate the issue found prima facie evidence of breaches of the University’s Code of Conduct and Statutes and recommended that the matter be brought before the University’s Disciplinary Committee.

The Committee, chaired by Justice Vida Akoto-Bamfo, a retired Supreme Court Judge, noted in its report to the Vice-Chancellor that there is prima facie evidence of misconduct against Professor Gyampo and Dr. Butakor contrary to Paragraph 6.4 of the Code of Conduct for Academic Staff of the University of Ghana, which stipulates that Academic Staff shall at all times comport themselves in ways that will enhance their image and that of the University.’

The school in a press release said “the Committee further found prima facie evidence of misconduct contrary to Statute 42(11( e l(ii) of the University of Ghana Statutes which states that no member of the University shall engage in a course of vexatious conduct that is directed at one or more ‘specific individuals, and that is known to be unwelcome.”