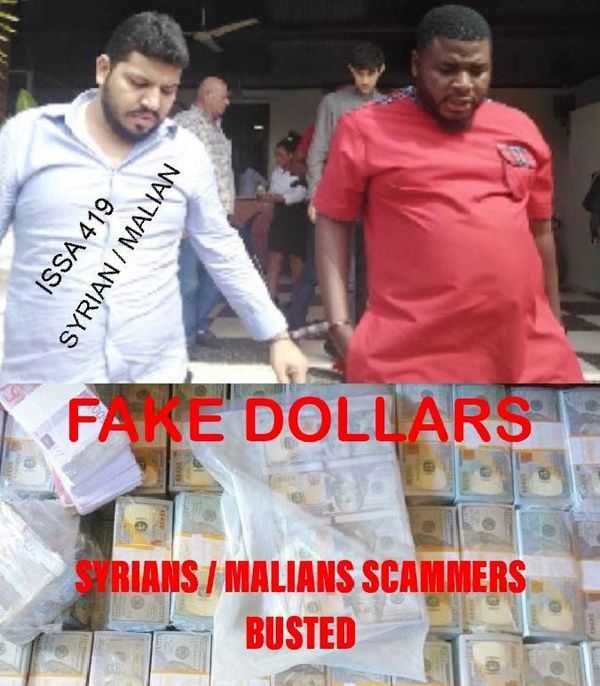 Suspected hardened criminals Yemenis and Syrians - Sanousi Khalifa Mohammed and cousin Amel acting to be Libyans are in the police grips after countless failed attempts to arrest them.

The suspects were yesterday picked up by the Tesano Police Intelligence team at the Landing Restaurant at the Kotoka International Airport (KIA) to conclude an 'Unfinished business' with the victims-El Klink Moustapha and Haidor Ibrahim.

Few weeks ago, the suspects succeeded in allegedly defrauding the victims to the tune of $270, 000 (part payment) under the pretext of a 450 million dollars business transaction.

Suspecting foul play, the victims suggested the balance of $80,000 be paid at a future date in Accra.

On Monday, the culprits agreed with the victims to conclude the deal but the suspected criminals failed to show up per the original agreement until they finally agreed to present the military trunks of cash declared as crystal and pick the balance yesterday.

A well orchestrated collabored plan involving the famous Tiger Eye PI and the police service laid ambush at the Kotoka International Airport area and succeeded in arresting the suspects in the afternoon.

The core syndicate comprising-fake names as Sanousi Khalifa Mohamed, one William (clearing Agent from the presidency), Amel (Cousin of Khalifa) Khalifa's wife and mother claim to be family of Muammar Gaddafi, the former leader of the Islamic Republic of Libya.

They told the victims that they have stash of cash parked in military trunks and needed safe means of transporting same out of Ghana.

The syndicate alleged that due to the ill-health of their aged Libyan mother, (soubhiya from Syria,) customs duties as well as some fees for top government officials at the president office and the minister of interior in ghana required bribe as well as other debilitating circumstances, they are unable to carry out the safe transportation of the money out of Ghana.

The money had been kept at the Free Zones office located at the Kotoka International Airport (KIA). As a result, they needed a honest person who is willing to partner them, and sponsor all the bills associated with the safe transport of the stash of cash (450 million of United States Dollars) for a specified share, upon a successful completion of everything.

Security personnel and residents in their Devtraco and Community 18 residence confirmed their neferious acts including allegedly using Ghana to defraud victims in and outside the country.

They are currently in the cooler pending further investigation regarding their alleged fake dollar business.

They hold passports of many countries; Niger, Mali, Syria, Yemen, Sudan, Chad and Nigeria, have allegedly defrauded countless victims in Ghana, Togo, Ivory Coast, Mali and many more around the globe.

They are expected to appear before the law courts in the coming days.