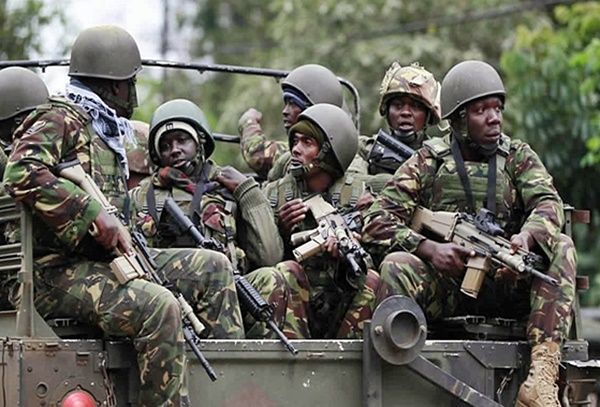 The Ghana Armed Forces (GAF) has refuted allegations of intimidation and prevention of eligible persons from registering in the ongoing voter registration in the residents of Banda Constituency.

According to GAF, there is no iota of truth in the reports.

The GAF further denied targeting any particular tribe and admonished the public to disregard those stories.

The General Secretary of the NDC, Mr. Johnson Asiedu Nketiah has been seen in a video on social media complaining about the presence of the military in the Banda area and arguing that soldiers were not supposed to be part of the registration process.

Some reports have suggested the military was preventing non-residents and people deemed not to be Ghanaians from registering in the area.

But a statement issued and signed by Colonel E. Aggrey Quashie, Director of Public Relations explained that the Military’s presence in the constituency is an agreement between both the National Democratic Congress (NDC) and New Patriotic Party (NPP) to provide security in the area.

“Following the reported allegation of registration restrictions being placed on a section of the community in the Banda area by the military, it has become necessary to situate the issue in context and set the record straight.

The military wishes to state that on 30th July 2020, the Bono Regional Security Council met representatives of the two main political parties – NPP and NDC – to deliberate on the peaceful conduct of the registration exercise. This was in the wake of the disturbances that resulted in the unfortunate demise of one person.

The Agreement signed by Mr. Joe Danquah (NPP) and Hon Ahmed Ibrahim (NDC MP – Banda) and witnessed by the Hon. Regional Minister stated as follows “We the undersigned agreed today to maintain peace in the Banda District during the remaining days of the voter's registration exercise and after until the end of the 2020 general elections December 2020”, the statement read.

The full details of the Agreement were as follows:

That the REGSEC will give the necessary security to the Banda Constituency and the entire Region, before, during, and after the process of the 7th December Election. The REGSEC and the Electoral Commission and other stakeholders should meet the Chiefs to determine the boundaries of Banda.

The two Parliamentary Candidates (Mr. Joe Danquah and Hon. Ahmed Ibrahim MP) should stop bussing people to the registration centres, if indeed they were ordinary residents; they should go there on their own volition.

Political parties should educate their agents at the registration centres to fill challenge forms in challenging people whose citizenship or residency they doubted.

That no physical violence should be used in preventing people from registering.

That the two candidates should pledge their support to ensure peace in the Constituency by signing the Peace Agreement offered by REGSEC.

Read the full statement below; 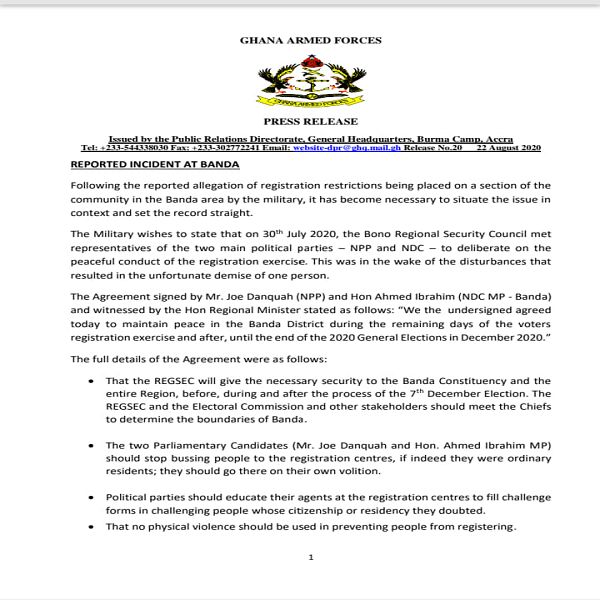