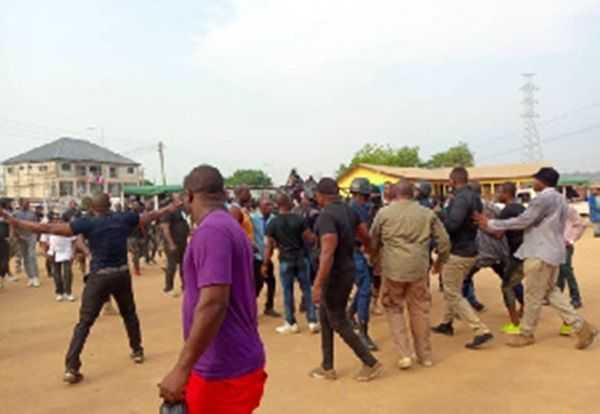 Reverend John Ernest Kwofie, the Chairman of the Western Region Peace Council, has condemned the pockets of violence during the on-going voter registration exercise in the country.

He, therefore, called on the authorities to bring the perpetrators to book to serve as a deterrent to others.

Rev. Kwofie said this during the opening of a two-day advocacy campaign workshop on the eradication of vigilantism in Ghana organized by the National Peace Council in Takoradi.

The workshop attended by political parties mainly NPP and NDC, Civil Society Organizations, Faith-based organizations, the Media and other relevant stakeholders, was to create awareness through advocacy campaigns on Act (999), as well as the Roadmap and Code of Conduct of Political Parties.

Rev Kwofie pointed out that politically related violence perpetrated by party-affiliated vigilante groups had become a major threat to democracy and the country’s peace, adding "this worrying trend, therefore, calls for concerted efforts by all and sundry to help in fighting the menace."

He appealed to political parties to respect the Vigilantism and Related Offences Act 2019 (Act 999) when planning their campaign activities for election 2020.

He said the enactment of Act 999 was borne out of the realization that vigilantism could no longer be tolerated in the nation’s body politic.

“We have come of age in our democratic dispensation, hence the need to reshape our political activities to catch up with the modern trends of politics,” he said.

Rev.Kwofie noted that if political parties respected the Act, the country would once again advance its democratic credentials with yet another smooth and peaceful election in December 2020.

“The Security Agencies are encouraged to enforce the Vigilantism and Related Offences Act 2019 (Act 999) to the letter without any fear or favour especially in this election year and beyond,” he said.

Rev. Kwofie pledged the commitment of the Council to continue to educate, sensitize and dialogue with stakeholders to ensure peace in the region and beyond.

For her part, the Western Regional Minister, Mrs Eugenia Gifty Kusi commended the National Peace Council for leading the way to educate and sensitize members of the various political parties on the existence of the Act.

She said it was unfortunate that "at this level of our Democratic dispensation, political parties and politicians use airwaves to insult themselves and turn round to blame state institutions for it.”

Mrs Kusi, therefore, tasked Political parties to continuously talk about the Act until it was understood and respected by all.

She assured the Regional Peace Council of the Regional Coordinating Council support and urged all to maintain the peace in the region before, during and after the elections.

Mr George Amoh, the Acting Executive Secretary of the National Peace Council, who took the participants through the Vigilantism and Related Offences Act 2019 (Act 999), described it as very important and urged political parties to abide by the provisions to ensure peace in the country.

Mr Amoh said under the Act, it was an offence punishable by law to fund vigilantism activities and urged those engaged in the practice to desist from it.

He advised political parties and the public to be guided by the Act and ensure their activities were in line with the provisions of the Act to avoid any breach and suffering the punishment.