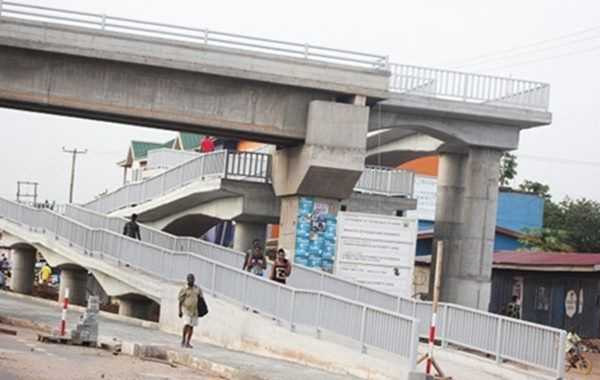 Pedestrians have abandoned many footbridges meant to aid their movements across some major roads in Accra and continue to jaywalk at the cost of their lives.

While the footbridges lie predominantly idle, some of the pedestrians, including children, meander their way through moving vehicles as they move from one side of the road to the other.

Some of them also jump over walls and barricades in their bid to cross over to other sides of the road, putting their lives and those of other road users in danger.

Additionally, some traders have converted the footbridges into shops where they display their merchandise while taxi drivers have turned the base of the bridges into car parks and stations.

This came to light when the Daily Graphic team visited some parts of Accra over a one-month period ending Thursday, July 30, this year, to assess the usage of some footbridges by pedestrians.

Among other things, the team observed that pedestrians, especially hawkers, had created their own (imaginary) zebra crossings under footbridges from where they crossed the roads with impunity.

Petty traders had also taken over some of the footbridges by displaying their wares to cash in on members of the public who were compliant enough to use the facility.

When the team got to the Madina Zongo Junction footbridge at about 3:30 p.m., the facility had been virtually deserted as pedestrians threw caution to the wind and battled with vehicles to cross the road.

Traders had also taken over both the base and top of the footbridge in a desperate attempt to earn their livelihood.

The situation at the Nkwantanang and other footbridges was not different from that of Madina Junction.

Some traders used the footbridges as a resting place to regain energy to continue their work, while beggars had also pitched camp to ply their trade.

At the Lapaz footbridge, the team observed that although barricades had been provided at the facility to compel people to use it, many pedestrians still defied the odds and scaled the barricades.

Some of the pedestrians the Daily Graphic spoke to gave flimsy excuses for not using the footbridge.

For instance, at the Madina Zongo Junction footbridge, 40-year-old Samuel Dogbe and others complained that they seldom used the footbridge because it was too long and, therefore, took too much of their time.

"You see, it will take me about 20 seconds to walk across from where I am to the other end of the road, but if I have to use this long footbridge, I can spend about five to seven minutes," he said.

For 52-year old Sarah Afumuah Boateng, a trader, she gets too tired climbing the footbridge and will rather manage her way through vehicles.

When asked if she knew the implications of failing to use the footbridge, she said: "I know that I can be involved in an accident at any time; even this last Tuesday, a car knocked someone here. But God will protect me."

In the view of Ms Linda Kyere, many pedestrians were disinterested in using the footbridge because there was greater motivation to ignore its use.

"The footbridge is too long and there is even no barricade along the road to compel people to use the bridge, so I do not blame them entirely”.

"If there was a net here to serve as a barricade like what has been done at the Kaneshie footbridge, no one could have crossed from one end of the road to the other without using the footbridge," he said.

In defence of their decisions to turn the base of the footbridge into a car park and station, a taxi driver, Mr Sam Abotsi, said that was the only way out because there was no space anywhere to park.

Section three of the Road Traffic Regulations, 2012 (LI 154) states: “A pedestrian who fails to use the footbridge or underpass where one is provided commits an offence. A person who contravenes this regulation is liable to a summary conviction, a fine not more than five penalty units or a term of imprisonment not more than seven days or both.”

When the Daily Graphic contacted the Ghana Highway Authority (GHA) on what would be done to ensure that the footbridges are put to good use, the Public Relations Manager of the authority, Ms Diana Seade, said the authority had fulfilled its mandate by constructing footbridges to ensure the safety of pedestrians.

She said the GHA had gone ahead to sensitise road users to the importance of using the facility for their own safety but it was worrying that some of them still risked their lives to cross the road at unauthorised areas.

Responding to a question on the way forward to reverse the trend, she said collective responsibility by all stakeholders was required to scale the challenge.

Ms Seade added that the primary responsibility of enforcing the law fell on the Motor Traffic and Transport Department (MTTD) of the Ghana Police Service.

“The police have, most of the time, educated these people and gone ahead to arrest some of them but surprisingly, the irresponsible attitude is still ongoing and such culprits keep exposing themselves and other road users to danger,” she said.

Ms Seade urged members of the public to be responsible for their own safety, stressing that “the protection of lives on the road is 99 per cent the sole responsibility of the individual.”