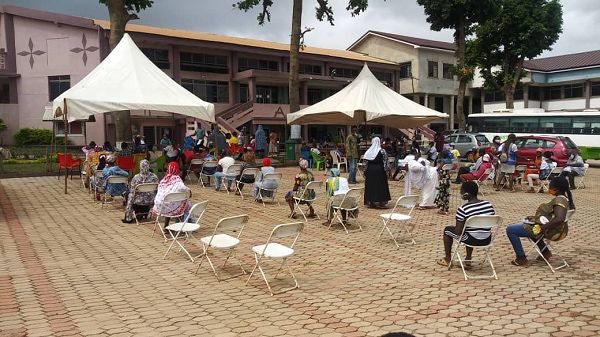 The last Phase of the voter registration exercise cruised to an end on Thursday with a characteristically low turnout compared to the previous phases, which saw a large troop of enthusiastic electorates in queues to register.

A Ghana News Agency monitoring team, which visited some of the registration centres in the Greater Accra Region, noticed a quiet atmosphere and idle registration officers.

Mr Christian Dzamshie, the Registration Officer for Nima Roman Catholic School centre (2) in the Ayawaso East Constituency, said 104 people had registered as at 1030 hours in the last phase of the exercise which started on August 1.

He said most people misunderstood the cluster process of registration adopted by the Electoral Commission and as a result, rushed to other centres during the first phase of the exercise which was outside their domain to register.

Mr Dzamshie said some of the applicants moved to other centres to register because they wanted to be among the first group of people to register.

Mr Dzamshie said generally the exercise was smooth and expressed the hope that the same success would characterize the general elections.

In the Ablekuma North constituency, there was a similar situation, with very little activity at polling centres in complete contrast with the enthusiasm that characterised the first phase exercise.

There were no queues at these centres, while registration officers were quite idle with almost no work to do.

Mr Ernest Dagbui, the Registration Officer for United Pentecostal Church, Ebenezer Temple Polling Centre, attributed the low attendance to the rush to register at other centres.
“The Voters ID card is very important and a necessity for every Ghanaian. Without it, you can’t vote in the country,” said.

He said the exercise was generally a fruitful one and as the numbers kept reducing by each phase, the pressure on their machines equally reduced and prevented further technical hitches.

Maame Esi Agyiriba, the Registration Officer for the Macedonia Methodist Church, Kwashieman Polling Centre, also attributed the low turnout to the fact that citizens were doubtful that each Centre would have a team coming around to register.

“The attendance has been very low; since Sunday, we have recorded only 63 people and for today, only 3 people,” she said.

Mr Alex Antwi, a welder, who successfully registered at the United Pentecostal Church, Ebenezer Temple Polling Centre, said he waited until the last day because his job was a busy one and he couldn’t bear the stress of joining a queue for long hours.

However, Mr Joseph Mawuli, a guarantor for Alex and also a colleague welder said it was a risky venture for anyone to wait till the last moment to register.

“I had my registration during the first phase and even though I didn’t take it easy, I knew it was the best. I wanted to get it done quickly and focus on other important things thereafter,” he said.

It would be followed up by a two-day mop-up registration exercise on Saturday, August 8, 2020 and Sunday, August 9, 2020 at the various district offices of the EC across the country for eligible Ghanaians who were not able to register in the mass registration.