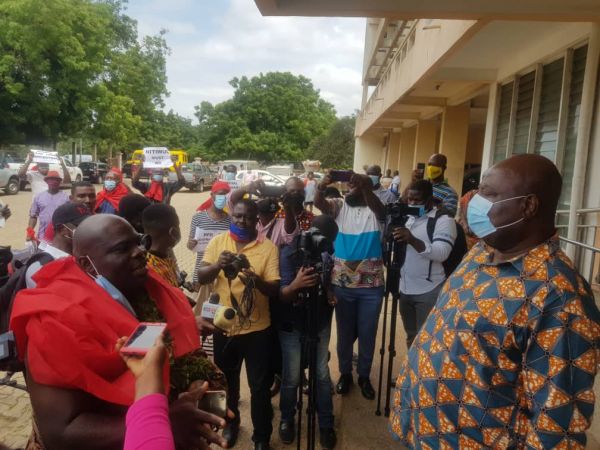 A group of La youth on Thursday morning stormed the Greater Accra Regional Coordinating Council in Accra to demonstrate against what they describe as illegal seizure of the La lands by the Military and NPP bigwigs.

The youth who held placards amidst chanting war songs at the Coordinating council also threatened to vote against the Akufo Addo led NPP government if their lands are not released back to them.

Some of the Placards read the following: La land is not kelewele”, “NPP you are bad” , “No land no vote” “Iskoki government”, “Nitiwul must go”, Mike Oquaye must speak, “Give us our land”.

Addressing Journalists after Presenting the Petition to the Greater Accra Regional Minister, the Vice President of the group calling itself Coalition of La Associations (COLA) Mr . Daniel MK Okpoti explained that the military lands belonging to La were acquired during Dr. Kwame Nkrumah’s regime for a specific purpose but was quick to add that the lands are now being sold to individuals and Estate Developers like one Nii Djato.

Some of the demonstrators with placards

Mr. Daniel Okpoti mentioned the Burma camp, Headquarters of the Southern command, the Ghana Civil Aviation lands at Adentan, site for Dairy farm project at Cantonment as some of the acquired lands belonging to La.

He added that other lands where the government has trampled upon their rights include the Trade fair site acquisition, Acquisition of Presbyterian Boys School, University of Ghana and Madina Department of Social Welfare which he maintains no compensation has since been paid to them.

The group also accused the Minister for Defense Mr. Dominic Nitiwul of allocating parcels of land to private persons adding that Mr. Nitiwul has also failed to fulfil his promise to give back all acquired La lands to them.

The group has therefore given a two weeks ultimatum to government to address their concerns or risk facing their wrath in the coming days.

The Regional Minister Mr. Ishmael Ashitey, receiving the petition assured them that government is going to look at the petition and address them appropriately.

“I have received the petition but I don’t know what is in it. I will open it and then discuss the content with the President . He is the only person who has the power to give back your lands to you, so I’m sure in due course you would hear from us. Thank you for coming” said Mr. Ashitey. 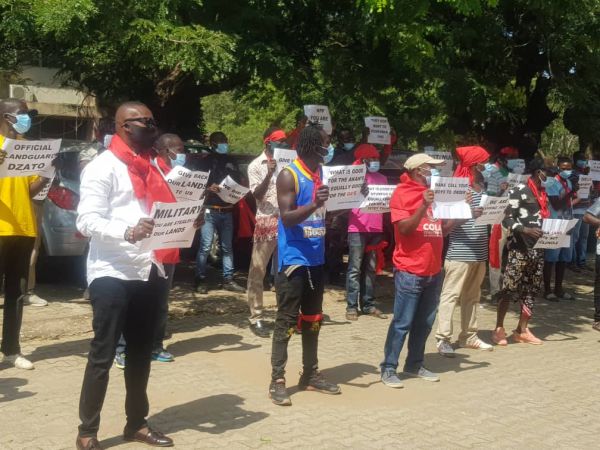