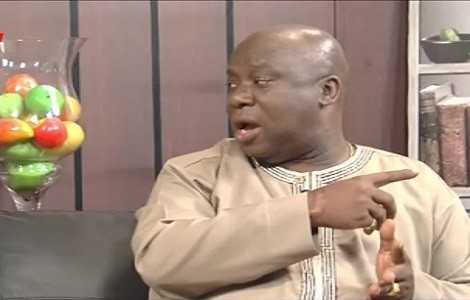 Greater Accra Regional Chairman of the NDC, Joseph Ade Coker, was forced to eat a humble pie at the premises of the House of Chiefs at Dodowa when the party paid a courtesy call on the traditional leaders.

In an attempt to uplift the mood of the chiefs and traditional leaders present, Mr Ade Coker gave an assurance that as part of infrastructural developments, the National Democratic Congress (NDC) will make it a priority to fix the dusty feeder road that leads to the grounds of the Greater Accra Regional House of Chiefs.

He promised that under the leadership of John Dramani Mahama and Prof Jane Naana Opoku Agyemang, the stretch would be the first to be constructed.

But responding to his promise, President of the Greater Accra Regional House of Chiefs, Nii Okwei Kinka Dowuona VI chided the NDC Regional Chairman, noting that he (Ade Coker) had been aware of their situation since they were last in power but turned a blind eye to it.

Addressing the gathering in the presence of the media which included GhanaWeb, the chief intimated that due to the practice of politicians only remembering chiefs when they want to attain power, Ade Coker was back in the house to make promises.

“One thing I want all of us to take out of our minds is that... when it is campaign time or election time, we get near our chiefs, they’re going to help us to win power. And after that chiefs become the punching bags. We are relegated and nobody cares about it.

“I’m happy regional chairman said Oh, look at the road coming here. He has been aware of it since 2012, but because he is not keeping a constant relationship with us, 2020 he comes and says when I come back, I’ll come and do it. This is something that we detest as chiefs,” Nii Okwei Kinka Dowuona VI stated.

The running mate of the NDC, Prof. Jane Naana Opoku-Agyemang, on Monday, August 10th, 2020, paid a courtesy call on the Greater Accra Regional House of Chiefs with a delegation from the party.

President of the Greater Accra Regional House of Chiefs, Nii Okwei Kinka Dowuona VI welcomed the entourage and thanked them for recognizing them and making time to visit.

He expressed the willingness of the House to partner the NDC government for development if they win the December 7 elections.

“May GOD and our ancestors bless you for recognising the need to see your landlords. Our collective desire is to see a prosperous nation. Ghana must win,” he noted.