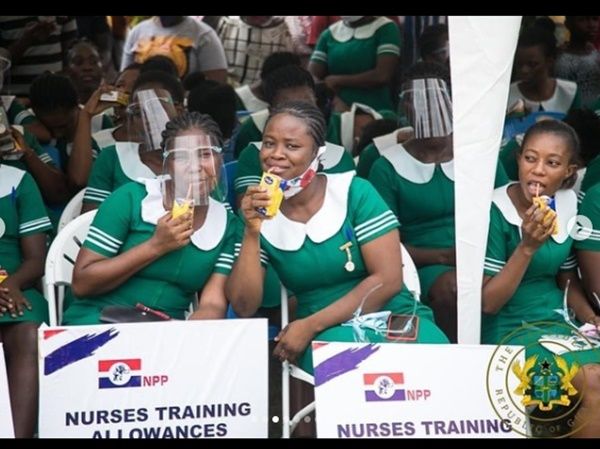 The Ghana Registered Nurses and Midwives Association (GRNMA) comprising all public sector nurses, midwives, Physician Assistants (PAs) and Anesthetists (CRAs) who embarked on strike have reportedly called off their action.

The nurses and midwives went on strike to demand for better conditions of services from the Akufo-Addo government.

Following their strike, the National Labour Commission (NLC) secured a court injuction to restrain them from laying down their tools and the Fair Wages and Salaries Commission (FWSC) also pleaded for them to back down on their strike and return to the negotiation table to have their grievances resolved.

Communications Director of the New Patriotic Party (NPP), Yaw Buaben Asamoa also called on the health workers to rescind their decision saying the President has "been good to you. We've been ably employed you . . . Be patient; I don't believe that the government that's created jobs for you and paid your allowances will turn to intimidate and sack you. It won't honour the government in anyway".

The nurses and midwives have finally heeded the calls to cancel the strike and resumed work effective immediately.

Speaking to Kwami Sefa Kayi on Peace FM's 'Kokrokoo' programme, the Dean of the School of Performing Arts of the University of Ghana, Legon, Professor Kofi Agyekum, popularly known as Opanyin Agyekum has thanked the health workers for going back to their work.

He was delighted by their decision because the health workers play a critical role in saving lives.

"When UTAG goes on strike and we resume, we can find ways to make up for the vacuum we created . . . but I'm always scared when the health workers go on strike because they deal with the lives of people," he said.