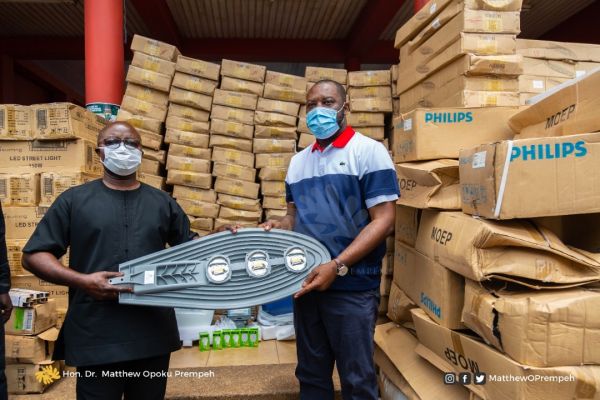 The Member of Parliament for Manhyia South constituency in the Ashanti Region, Dr. Matthew Opoku Prempeh has donated 613 pieces of LED street light bulbs to his constituents.

Also, he donated 10,000 pieces of energy-saving bulbs, which are to be shared with every household in the constituency.

The MP, who is the Minister of Education, also absorbed the cost of fixing the street lights bulbs during the presentation on Saturday, September 19, 2020, at the Abbey’s Park at Ashanti New Town.

The donation followed appeals made to the MP by the Assembly members for street light bulbs to improve the lighting and security situations in their areas.

NAPO, as he is called, said the street light bulbs will beef up security in the areas to protect lives and properties, and called on the Assembly members to take steps to ensure that the bulbs are distributed accordingly.

“This donation is not made to win votes for myself or the party, but as part of my responsibility as an MP, seeking the good welfare of my people. I will continue to serve my people with all my will, who I cherish so much,” NAPO said.

Adding "I will make sure I fix all the challenges facing the constituency. Those areas which their challenges are yet to be addressed, I promise to assist these areas to have them solved.”

The bulbs were handed over to the Kumasi Metropolitan Assembly (KMA) to be distributed to the six electoral areas in the constituency.

Per the calculation, there will be an excess of 83 street light bulbs, which will be kept as stand-by.

The MCE of Kumasi Metropolitan Assembly (KMA), Hon Osei Assibey Antwi, on behalf of the Assembly, thanked the MP, and believed, the presentation will go a long way to solve the insecurity in the areas because of the dark nature in some areas.

“The Assembly is grateful to Hon. NAPO and we believe that these bulbs have solved the darkness challenge situation in the electoral areas to save the people from armed robbery attacks,” Assibey Antwi gleefully said.