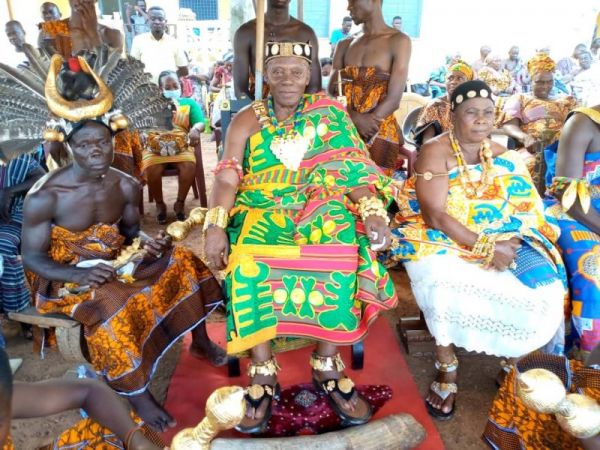 The President of Prang Traditional Council and the Omanhene of Prang Traditional Area in Pru West District in the Bono east region Nana Kwadwo Nyarko III and his chiefs have commended Npp government led by President Akufo-Addo and described him as their 'Messiah' in terms of his unprecedented developmental projects which has been scattered at their traditional area.

According to Nana Kwadwo Nyarko III who was Speaking during 2020 Prang Nkyifie yam festival celebration explained that their traditional area have seen massive developmental projects within almost four years under President Akufo-Addo's administration.

This years festival was mainly celebrated to honour President Akufo-Addo over his unprecedented achievements for the people of Prang traditional area.

It was celebrated under a theme, Sustaining Peace, Progress and development in a new fast developing district and in a new region.

He said, their community water supply project which was abandoned since Gold Coast time has now been completed complete and working by president Akufo-Addo and now supplying water to the people of Prang township.

Moreover, they have also gotten their share of One district, one factory and also Pru west district Administration block is ongoing, construction of bono east regional feeder roads office is also ongoing at Prang, planting for food and job has also helped farmers within their traditional area, one million dollar per constituency projects such as boreholes and toilet are at every where in their district.

More over the chiefs and the good people of Prang, commended President Akufo-Addo for remarkable and inspiring leadership shown in our combating the Covid-19 pandemic. Nana said it is without doubt that president Akufo-Addo's industrious efforts and abilities have earned him the chairmanship position of the ECOWAS.

He revealed that he celebrates his fifty - fifth year at the President of the Prang Traditional Council ad the Omanhene of Prang traditional area, he can boldly say that the people of Pru West District (Prang and Abease) are among the luckiest newly created district in Ghana based on the unprecedented developmental projects scattered across the district.

He appealed to government to speed up work on the construction of their   District hospital and also needs additional ambulance as their population has increased.

Again he called on the government to put up more school dormitories and classrooms for Prang SHS to reduce congested.

Afterwards the District Chief executive for the area,Stephen Jalulah who represented President Akufo-Addo also assured the chiefs and the people at Prang that Npp will upgrade their health center to hospital and also put up more school dormetries for Prang SHS to help to reduce accommodation problems facing the school when giving another four years.

He appealed to the chiefs to be always united and preach about peace before, during and after election so that they can develop their new district.