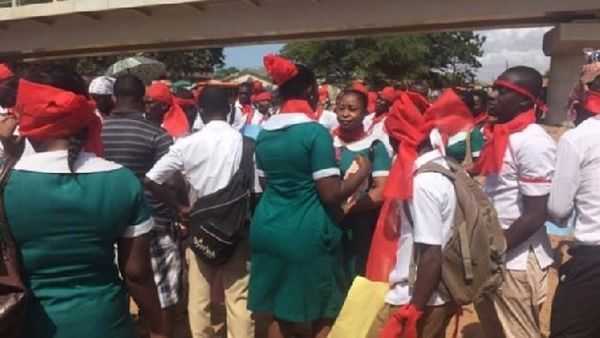 The Rotational Nurses and Midwives Association (RNMA) has indicated that if by Friday, November 20 the salaries and allowances of its members which have been in arrears for the past eight months are not paid by the government, the association will “advise itself.”

The association said for instance its October 2019 interns had not been paid while the April 2020 interns who had worked for eight months had also not been paid.

The National President of the RNMA, Mr Jerry Mertins Aziamadia, declared the association’s intention at the official launch of the RNMA at the Eastern Regional capital, Koforidua, recently.

Speaking at the event on the theme: "The Impact of COVID-19 on Universal Health Coverage: The Role of the Nurse, Midwife, Major Stakeholders and Government", Mr Aziamadia indicated that newly trained nurses who were degree and diploma holders had not been paid their salaries and allowances for months after graduation.

He said that in most cases the nurses had to embark on series of demonstrations, press conferences and picketing at offices of the Ministry of Health before their demands were met.

According to him, during those periods, the newly trained nurses had to work on empty stomach and endure a lot of hardships such as transport cost, payment of rent, payment of utilities and taking care of their families.

He, therefore, asked the government to pay the salaries and allowances without delay.

To remedy the situation, Mr Aziamadia suggested that the government, through the Nursing and Midwifery Council (NMC), Ministry of Health (MOH), and the Ministry of Finance (MOF), should ensure that granting of financial clearance, filling of IPPD forms, generation of staff IDS and biometric registration was done timely to prevent interns working from November this year, and future ones did not experience such difficulties.

Mr Aziamadia also called on the government to have the posting of nurses done expeditiously to avoid the nurses becoming unemployed.

He urged that the required guidelines for the payment of salaries and allowances of degree and diploma holders in the nursing profession must be strictly followed.

For her part, the National President of the Ghana Registered Nurses and Midwives Association (GRNMA), Mrs Perpetual Ofori Ampofo, called on the government to increase the budgetary allocation to the health sector which currently stood at 10.5 per cent, and cited that globally the allocation was 15 per cent.

She was hopeful that the grievances of nurses would be addressed in order to partner other stakeholders such as the government and the public to ensure universal health for all by the year 2030.

"If Ghana can attain universal health coverage by the year 2030, then we need to take a critical look at the training and quality of the health work force, especially nurses and midwives, as well as the health infrastructure and equipment needed for service delivery. Also, the National Health Insurance Scheme (NHIS) and private insurance schemes and the governance systems at all levels," Mrs Ampofo stated.

"We are all called upon to act. Policy makers must understand that UHC is a political choice, we must shine for equity and justice in health, which requires careful policy dialogue tailored to Ghana's needs and capacity," she added.