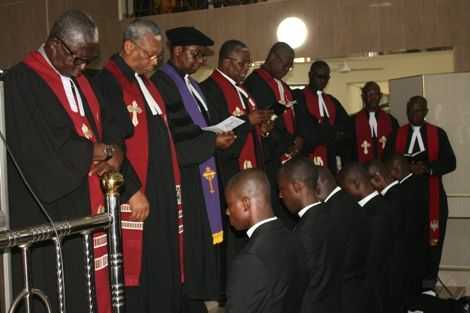 Rev Prof. Joseph Obiri Yeboah Mante, President of the Trinity Theological Seminary in Accra has said that the behavior of some self-acclaimed pastors in the country is making Christianity becoming abusive in recent times.

He said such pastors are only exploiting the belief of the public under the guise of miracles and spiritual intervention and therefore cautioned the public to be on the lookout in other not to fall victims of such scrupulous men and women of God.

Rev Prof. Mante expressed the concern in a sermon he preached at the Commissioning of 24 Ministerial Probationers of the Presbyterian Church of Ghana at the Covenant Congregation at La-Nkwantanang in Accra on Sunday.

The new ministers comprising 22 males and 2 females pursued different degree programmes in Theology at the Trinity Theological Seminary in Accra based on which the General Assembly Council of the Presbyterian Church of Ghana expressed satisfaction at their work and approved their commissioning.

Rev Prof. Mante said it was unfortunate that some of these pastors also take advantage of the unsuspecting victims by taking them through unwarranted healing and deliverance processes.

He warned the newly commissioned ministers not to associate themselves with such charlatans who claim to be practicing the biblical teachings of Christ.

Rev Prof. Mante said there is no doubt about prophecies and miracles in the lives of Christians and the Church. The issue of concern is how these few charlatans manipulate their congregations for their selfish interests.

He maintained that such so called ministers of the Gospel need to be exposed and condemned in no uncertain terms because their irreconcilable with the Bible, which is the standard for evaluating prophecies.

Rev Prof. Mante expressed worry about how these charlatans have taken over the airwaves and deceiving people with all kinds of strange doctrines in the name of religious freedom.

He said the time has come as a people; we take a cue from the Bible in evaluating prophecies and teachings from questionable men of God, in order not to fall prey to their machinations.

In a brief address before the commissioning, Rev Asa Ntow, who represented the probationers, expressed his appreciation to the hierarchy of the church for their ministerial training and promised that they would do their best in their ministerial journey to lift the banner of Jesus high.

He therefore pledge on behalf of his colleagues to adhere to the commands of God and the doctrines of the Church in order to remain faithful to God and His Church. Rev Asa Ntow asked the church members to pray for them to ensure the success of their ministries.