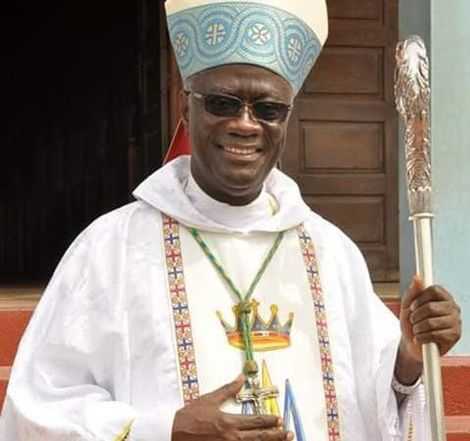 The new Catholic Archbishop of Accra, the Most Rev. John Bonaventure Kwofie of the Congregation of the Holy Spirit (CSSp), on Sunday took canonical possession of the Archdiocese during a Mass at the Holy Spirit Cathedral.

Soon after his enthronement by the Prefect of the Dicastery for Promoting Integral Human Development, Peter Cardinal Appiah Turkson and the Apostolic Nuncio to Ghana, Most Rev. Jean Marie Speich, the priests, the religious and laity took turns to congratulate and pay the traditional Catholic allegiance to him.

The Chief of Staff, Mrs Frema Opare led a government delegation to congratulate him, followed by traditional rulers from the Greater Accra and Western regions.

Just when Most Rev. Kwofie stood up to bless and greet the congregation, the rains started and many among the congregation applauded, interpreting the rains as God pouring blessings on his people on the spectacular occasion.

And even as the waters poured, Most Rev. Kwofie went out to bless the congregation and other invited guests who were seated outside.

The Catholic Bishop of Jasikan, the Most Rev. Gabriel Mante presented Most Rev. Kwofie to the congregation after which the Papal Bull, mandating him to be the Archbishop of Accra was shown to the Bishops, College of Consultors, the clergy, the religious and the lay faithful.

After his enthronement and the subsequent paying of allegiance to him, the Most Rev. Kwofie took over the celebration of the Mass which had earlier been led by the immediate past Archbishop of Accra, Most Rev. Gabriel Charles Palmer-Buckle.

The President of the Ghana Catholic Bishops Conference, the Most Rev. Philip Naameh, in his homily, said the care for the local church and the saving of souls, should be the primary concern of the clergy.

He urged Ghanaians to use the recent transfers of Most Rev. Palmer-Buckle to Cape Coast and Most Rev. Kwofie to Accra to dismantle all ethnic, religious or political divisions.

He explained that in the Catholic Communion, there were no barriers as the Church saw itself as one body, irrespective of one’s ethnicity or political background.

Most Rev. Naameh, who is also the Archbishop of Tamale, said he was looking forward to an era in Ghana when a political party in government would appoint competent persons in other political parties to help build the nation.

President Nana Addo Dankwa Akufo-Addo, in a congratulatory message, was hopeful that the previous positions Most Rev. Kwofie held would help to drive his present duties.

“It is also my sincere wish that the doors of the Accra Archdiocese will be opened to me under your tenure, just as they were under your predecessor,” the message said.

The Ghana Catholic Bishops Conference stated in its congratulatory message that, “The great witnesses you have borne in your ministry as Chief Shepherd of the Sekondi-Takoradi Diocese not only bears eloquent testimony to your devotion to duty, dedication to service and servant leadership but above all, it is a testimony to your hard work and strong belief in God who calls us always to launch into the deep for abundant harvest in his vineyard.”

In his address, the Most Rev. Kwofie described his enthronement as “a call within a call” promising that he would continue the good works of the past Archbishops of Accra.

He called on Catholics to continue with the propagation of the word as that was the core mandate of Christians.

“Let us continue to be teachers, shepherds and disciples of Christ Jesus, and let us learn from the works of the master, Christ Jesus,” he said.

The Most Rev. Kwofie was on January 2, 2019, appointed Archbishop-elect of the Accra Archdiocese, thus becoming the fourth Archbishop of Accra.

Until the announcement of his appointment, the Most Rev. Kwofie was the Bishop of the Sekondi-Takoradi Diocese from September 13, 2014.

His predecessor, the Most Rev. Palmer-Buckle was on May 11, 2018, transferred to Cape Coast as Archbishop.