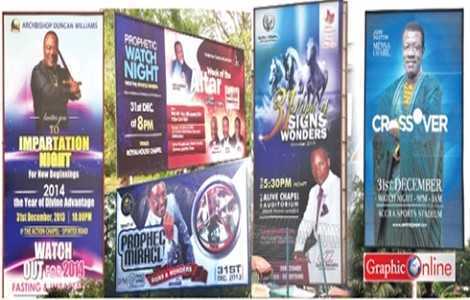 Ghanaians will Tuesday join the rest of the Christian world to ring in the New Year with watchnight services.

These services are mainly devoted not to only glorifying the Lord for his gift of life and other blessings but to ask for his continued grace to prosper.

Churches usually record their highest attendance in the year as Kofi Kinaata’s so-called ‘part time Christians’ endeavour to spend their last hours in the outgoing year in the presence of their maker right in the ‘House of God’.

The services, marked with worship, praises and prayers, usually start between 1900 hours and 2100 hours and end after midnight, following a countdown amidst intense prayer into the New Year.

Worshippers usually are clad in white attire and may do something symbolic under the direction of their spiritual leader.

Some churches announce their prayer themes, on billboards, a few months ahead of the occasion to attract believers who wish to enjoy the blessings, breakthrough or deliverance being sought.

The “Cross Over” theme of the International Central Gospel Church has become a very popular one, just as their service, which is usually held in large spaces outdoors, such as the Independence Square.

For the Maker's House Chapel International, it is a night of Prayer and Covenant.

For Ms Afia Ampomah, she would never be happy missing a watchnight service because it offered the ultimate platform for sealing all the prayers she had offered throughout the year and renewed her covenant with God for continuous guidance, protection, prosperity and peace.

Kodjo Adams deems it as unique opportunity to show gratitude to God for sustaining him through his challenges in the past year.

“Showing gratitude is very important, you see so I have to be there at all cost,” he emphasised.

Mr Kofi Oduro explains that it is important to position himself spiritually for the transition into the New Year and commit his family into the hands of God for a prosperous year.

For Nii Attuquaye, the Watchnight service prevents him from going to town to ‘misbehave’ and endanger his health, so he has fully embraced it as one of the important activities of the Church.

“Before I converted, I enjoyed the wildness of the night, but now I know that it is senseless,” he states.

Kofi Attoh, who hasn’t been to church the entire year says he is considering honouring one of the many invitations he has received because the night is crucial for attracting the blessings and protection that will sustain him for another year.

In recent times, Watchnight services of certain charismatic churches have become sources of prophecies about some prominent persons in society.

Many of these prophecies pronounce doom on their targets, thus attracting a lot of controversy and criticisms.

The Britannica, traces the origin of watchnight service to the Emancipation Proclamation (enacted January 1, 1863), which freed slaves in the Confederate states during the American Civil War.

“The tradition of Watch Night may be traced to the early 18th century in Moravian churches, when churchgoers began marking the occasion with a vigil to reflect upon the year past and to contemplate the one to come,” it states.

“John Wesley adopted the practice for his Methodist followers, who held similar vigils monthly with the full moon. It was given new significance among African Americans on December 31, 1862, when, according to tradition, slaves in the Confederate states gathered in churches and private homes on the night before President Abraham Lincoln’s Emancipation Proclamation was expected to go into effect, pending his signing of the document.

“The soon-to-be-free slaves stayed awake all night and watched the night turn into a new dawn while waiting for news that the Emancipation Proclamation had been issued, thus making all the slaves legally free”.