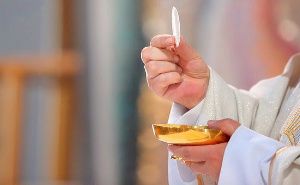 The above text resonates well with Christians on days that communion is to be shared and eaten in Churches. According to the bible, Christians, partake of Holy Communion in remembrance of the body and blood of Jesus, that was broken and poured at the cross.

Taking Holy Communion does not only remind Christians of Jesus Christ's suffering but also shows them the amount of love Jesus had for them.

However, the Chief Priest of Osu, Wor-Lumor Nuumo Noi Sekanku Kpenuku II has described the practice as a fetish act.

Sharing what he describes as fetish, he queried why churches would eat bread and say it is the body of someone (Jesus Christ) who died years ago.

"If you go into the church and you take bread, and you say it is the body of somebody who is dead, is that not fetish? So why do you condemn mine when I also pray to my 'Obomawu' (creator) why? And you people believe them and you look down on your own religion. No, No it's very sad. No, it shouldn't happen."

He explained that the British are trying to capture Ghanaians' mentality through religion, proudly affirming that the traditional religion was the first-ever religion on earth.

He continued that, there is nowhere in the bible that showed Jesus Christ introducing himself as a leader of a particular church, but in recent times, there has been an influx of different churches all over.

He dared any pastor to prove if Christ ever introduced himself as the leader of any church using the bible.

"Christianity just came by introduction. What is Christianity? Even Christ did not introduce himself as the head of any church. No Christ never said that. I want a pastor to come into this room, take the bible, and tell me this is the quotation, Christ said this is my church. It was said after his death."