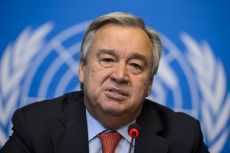 United Nations Secretary-General Antonio Guterres said Wednesday that issues related to pregnancy are still the leading cause of death among girls aged 15 to 19.

"Around the world, we are seeing pushback on women's rights, including on essential health services. Issues related to pregnancy are still the leading cause of death among girls aged 15 to 19.

Gender-based violence, which is rooted in inequality, continues to take a horrific toll," the UN chief said in his message on World Population Day to be observed on July 11.

Speaking of the overall situation, the secretary-general said that while the world's population overall continues to increase, this growth is "uneven."

"For many of the world's least developed countries, the challenges to sustainable development are compounded by rapid population growth, as well as vulnerability to climate change.

Other countries are facing the challenge of ageing populations," he said.

Talking about the trend, Guterres said that "as the world continues to urbanize, with 68 percent of the world population projected to live in urban areas by 2050, sustainable development and climate change will increasingly depend on the successful management of urban growth."

World Population Day, which seeks to focus attention on the urgency and importance of population issues, was established by the then-Governing Council of the United Nations Development Programme in 1989, an outgrowth of the interest generated by the Day of Five Billion, which was observed on July 11, 1987.

This year's World Population Day calls for global attention to the unfinished business of the 1994 International Conference on Population and Development.

Twenty-five years have passed since that landmark conference, where 179 governments recognized that reproductive health and gender equality are essential for achieving sustainable development.