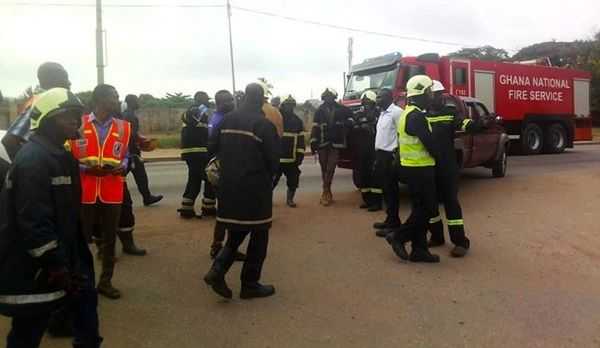 Workers of Ghana Household Utilities Manufacturing Company (GHUMCO) in Takoradi had to run for their lives early on Tuesday over what was said to be a massive gas leakage on the premises of the company.

According to the workers, a gas tanker was discharging Liquefied Petroleum Gas (LPG) on the company’s premises at about 6:40am and in the process, the hose reportedly developed a fault.

They then heard a big boom which forced the entire staff on duty to vacate the premises to avoid any catastrophe.

It would be recalled that about two years ago an unfortunate gas explosion occurred at the same utensils manufacturing company which resulted in hundreds of the workers and residents around sustaining serious injuries.

Personnel from the Ghana National Fire Service responded quickly to distress calls to bring the situation under control.

Residents and commuters said they could smell the leaked gas which prompted attendants at some nearby filling stations and shops to vacate their posts as fire officers monitored the situation.

“We were discharging gas this morning but the driver realized the pressure was low so he decided to do something about it. He went in to the vehicle and altered something then the pressure increased. Few minutes later we noticed the hose was quaking and went out of control,” a GHUMCO staff said.

The Sekondi-Takoradi Metropolitan Fire Officer, James Ankrah, assured the public that the situation was under control and there was no need to panic.

He charged the company to build the capacity of staff in the handling of gas, saying “it is a requirement that drivers and their mates who do the discharge are trained to follow discharge protocols.”

The Metropolitan Chief Executive, Anthony K.K. Sam, called for a thorough assessment of the incident to avert future occurrences.