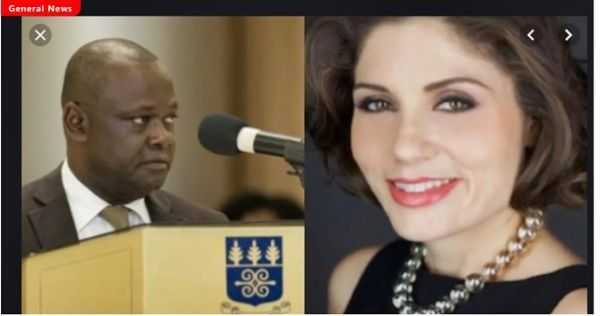 The Vice-Chancellor of the University of Ghana, Professor Ebenezer Oduro Owusu, has called on the general public to reject a sexual harassment accusation made against him by the CEO of Africa Integras, Ms Andrea Pizziconi.

Prof Oduro Owusu told Accra FM on Thursday, 10 October 2019 that Ms Pizziconi is “desperate” and “bitter” because he renegotiated her company’s contract with the University of Ghana.

“We have never sat anywhere one-on-one because my policy is that we work as a team and, so, I don’t sit one-on-one with people and that is what she didn’t like.

“The last time she said she wanted to meet me one-on-one, I called the Registrar to join the meeting but when she realised that I was coming with others, she didn’t like that idea. I have never been in a secluded area with her – either in my house, office or hotel; never.”

“The simple thing I will say is that her accusations against me are untrue.”

Prof Oduro Owusu, however, said if the University’s Council decides to investigate Ms Pizziconi’s allegations against him, he is ready and willing to submit himself to that probe.

“Of course, I will make myself available if the University’s Council decides to investigate this matter. I am a law-abiding person, especially when I know I have done no wrong. It is up to her to prove her claims.”

In a social media post, Andrea Pizziconi alleged that in all her dealings with the University of Ghana, it was Prof Oduro Owusu who made her most uncomfortable.

She claimed that Prof Oduro Owusu declined to work with her to save the Africa Integras project on the basis that she was “far too pretty to worry my little head about the project”.

She alleged that on one occasion when they met, the V-C ordered: “Turn around, everyone, I want to give her a proper hug.”

Andrea Pizziconi said that her refusal to kowtow to the pressure from the Vice-Chancellor “landed her in the headlines for years with attacks against her character and credibility despite the building sitting on campus for anyone to inspect”.

In her post, she also alleged that Prof Oduro Owusu “confidently declared as much publicly at a UG Council meeting in August 2017 suggesting that the Africa Integras project deal with the university was invalid as it was signed under duress in a hotel room between his predecessor and herself.”