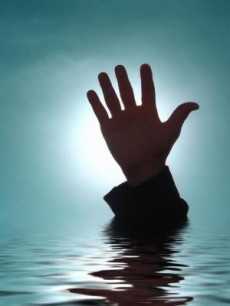 Ten fishermen from Tema Newtown have been rescued by the Tema Port Security Officials after their canoe capsized at sea early Thursday morning.

The fisher-folks, who were aboard a canoe known as Matthew 7:7, had gone on a fishing expedition and had 23 cartons of fish, but were met with challenges that affected their canoe.

This was made known in an interview with the Ghana News Agency (GNA) at the Tema Port by the Head of Intelligence, Tema Port, Sheikh Labaran Salifu Barry.

Sheikh Barry told GNA that on Thursday morning, “Our outfit received a distress call. We immediately dispatched men to the seas, and arrived on time to save the men in question.

He said the fishermen run short of fuel and therefore lost the functions of the outboard motor “and then in the process of refueling the motor, the weather changed suddenly as they were hit by a storm”.

Sheikh Barry explained that the distressed fishermen were on the sea when the patrol canoe got to them and rescued them to the shore. “After our investigations, some of them complained about sustaining wounds and were sent to hospital”.

He said this was the third time such an incident involving the local fishermen had happened this year; there was, therefore, the need to collect data on the activities of the local fisher-folks in order to track their operations.

The Intelligence Chief hinted that a lot of lives were lost at sea because authorities did not know the number of fishermen that went out to sea nor those that returned and therefore disasters at sea sometimes went unnoticed.

“There’s, therefore, the need to create a logging system which would demand that fishermen log in and out when they go out for fishing to allow fishing authorities track their activities and save them accordingly,” Sheikh advised.

Sheikh recommended the need for collaboration between the Fisheries Commission and the Ghana Ports and Harbors Authority (GPHA) which would make the two institutions champion the rights of fishermen since the fishing industry in Tema falls under the two organizations.

“If Government decides to register all the fishermen into a social security framework that would ensure that they contribute towards their wellbeing and eventual retirement, it will help a lot,” he said.