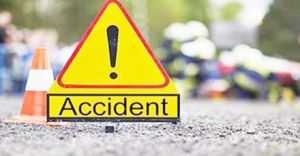 The Ghana Immigration Service (GIS) on Tuesday denied media reports that the Comptroller-General of Immigration (CGI), Mr Kwame Asuah Takyi, has caused an accident at the Suhum overhead on the Accra-Kumasi Highway in the Eastern Region.

A statement issued and signed by Supt. Michael Amoako-Atta, Head of the Public Affairs Department of the GIS, and copied to the Ghana News Agency, said the accident occurred after the CGI and his team, returning from a working tour of the Bono East Regional Immigration Command on Sunday, February 9, 2020 drove past the Suhum Overhead.

The statement said Mr Takyi and his team were not involved in any accident nor caused any, as had been purported.

“At Suhum, at the roundabout of the overhead, the dispatch rider stopped the said private vehicle this time round. The bodyguard of the CGI alighted, took the registration number of the vehicle and rejoined the CGI and his team to continue with the journey where a complaint was lodged with the Police Officers on duty at the Doboro Police Barrier.

“It was after that exercise that the CGI and his team continued with their journey back to Accra only to hear that an accident had occurred at Suhum with two persons injured and hospitalized,” the statement said.

“Our checks indicate that indeed there was an accident at the same spot where the CGI and his team stopped the private vehicle, but that was after they had left.”

It implored all media houses to cross check information in their custody with the Public Affairs Department of the GIS for confirmation before publishing.