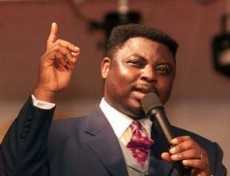 Pastor Mathew Ashimolowo, founder and Senior Pastor of Kingsway International Christian Centre has urged Christians around the way world to stay away from theories and claims of 5G being the Antichrist.

The KICC founder who admitted that he is not a scientist but a Pastor, stated that anytime there is a major shock around the world the church thinks it is the Antichrist. He went on to recount how the church thought Napoleon, Benito Mussolini, Hitler and many others were the Antichrist.

He also threw a shade at Pastor Chris who he said he is disappointed in for putting out a graph to show a link between 5G, Coronavirus and the Antichrist. He adviced everyone to stay indoors amid the lockdown over Coronavirus outbreak.

Here is the video below;

.....says anytime there’s a major shock around the world, the church always thinks it’s the Antichrist

Recall that Pastor Chris Oyakhilome who was preaching to his congregation on a live TV program few days ago, stated that the pandemic was created to popularize the 5G network which is gradually gaining attention across the world.

He added that these are part of the Antichrist's plan for a new world order which includes; one world government, one world religion and one world economy. Pastor Chris backed his claim with Revelation Chapter 13.