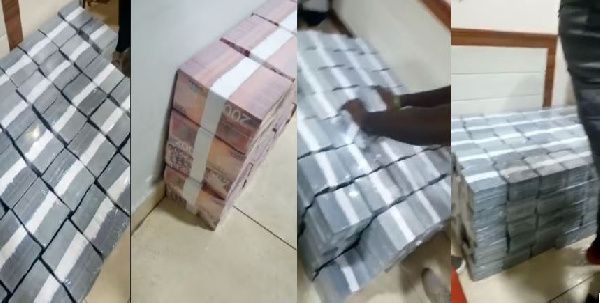 Bundles of cedi notes being packed by some unidentified youth have left many in awe after a video clip that captured the scene surfaced online.

It is unclear whose building the monies were packed beautifully. What is clear, however, is the fact that the young men could be heard expressing elation during the busy moment of arranging the bundles of cash according to denominations.

The denominations included GHC100 and GHC200.

The conversation which ensued between the young men suggested the monies were not theirs, rather, they had been tasked to offload them from bags.

“Film as we arrange,” one said with another raising an objection in local dialect Asante Twi. “Hold on. You can film when we’re done with the arrangement. I’ll film as well for future purposes.”

As hysterical as they were, they heaped words of encouragement on themselves and expressed optimism of amassing such sums of money before they depart to eternity. But as a characteristic of men, they hurled insults at each other with no hard feelings.

“We will surely make it,” one was heard trumpeting.

Watch the video below:


This is not the vault of the BoG or any Bank, this is the home of a minister of state...

Watch out for more