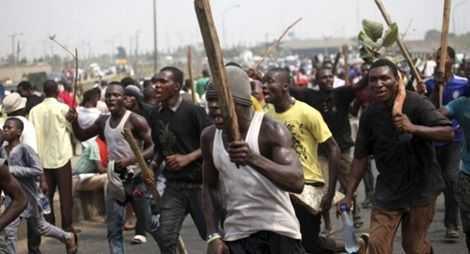 A 75-year-old farmer has been killed and several others wounded at Kandiga-Apimpingo in the Kassena Nankana Municipality of the Upper East Region following renewed clashes related to land.

A majority of residents of Kandiga-Apimpingo have fled their homes with their belongings to near-by communities in the Bolgatanga municipality.

The police and the military have taken over the security of the area while investigations have since begun.

A manhunt has also been mounted for the arrest of the perpetrators.

According to residents and family of the deceased, Agum Adongo, he was killed by unknown men close to his house in Kandiga-Apimpingo.

Around 7:30am Saturday, few houses belonging to residents of Kandiga-Apimpingo in the Kassena Nankana Municipality were torched while some residents sustained cutlass wounds.

Residents were seen leaving their homes with few of their properties when 3news.com got to the area.

“I am going somewhere to stay because my father has been killed and it's not safe for me,” a man believed to be the son of the deceased said.

The Navrongo police arrived at the house of the 75-year-old man and took his lifeless body to the mortuary for autopsy.

There were several cutlass wounds on his head and part of his face, 3news.com can confirm.

The Navrongo District Police Crime Officer, ASP Addah Kingsley, said they got the news of the incident a few hours after it happened and his men quickly got to the area to save lives and properties.

He said the cause of the clash is yet to be established but believed it had to do with the pending land dispute between residents of Kandiga and Doba.

“We are investigating the matter and not long from now those who perpetrated this act will be arrested,” he said.

The widow of the deceased who said she witnessed the crime narrated what she saw.

“I was in the house with my husband when we saw one of our sons run to the house shouting of an attack and few minutes later, about seven abled men whom we knew from the other community stormed our house and killed my husband beside his farm on his way to nature’s call,” she narrated in local language Nakani.

“The men told me to keep quiet and not to cry or shout which I complied [with].”

The daughter of the deceased also narrated her side of the story.

“We know these people and their houses are not far from us though they are from Doba. We don’t know what we have done to them,” she cried.

The piece of land at the centre of the dispute has been earmarked for the construction of a police station.