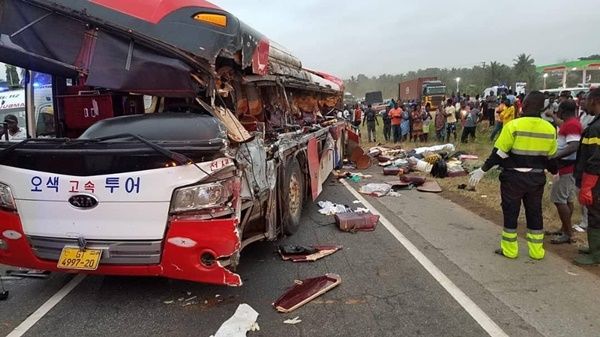 12 people are reportedly feared dead and over 50 injured in a horrific accident involving two buses and a cargo truck at Kyekyewere on the Accra-Kumasi Highway in the Eastern Region around 5:30 am, Tuesday.

In a report filed by Peace FM's Eastern Regional correspondent, Michael Akrofi, the Cargo truck which was heading towards Kumasi direction from Accra burst a tyre causing the driver to veer off his lane into the lane of an oncoming STC bus followed by another bus.

Nana Akomea reacting to this described the accident as unfortunate and said the police need to be empowered to check the tyres and other essential parts of these trucks to avoid some of these accidents.

Personnel from the Ghana Police Service and the National Disaster Management Organisation (NADMO) were called to the scene to help control the situation.

Sources say some of the victims involved in the accident have been sent to the Nsawam and Suhum Government Hospitals.

Listen to Michael Akrofi's report in the video below