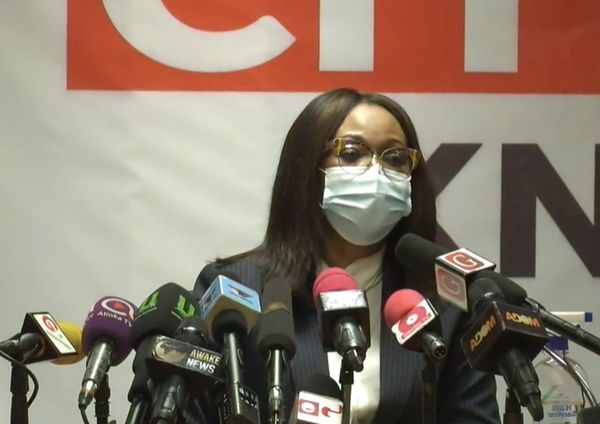 The Electoral Commission has set a filing fee of Ghc 100,000 for persons and parties willing to file their nominations to contest for the Presidential seat and Ghc 10,000 for aspiring parliamentarians.

This was disclosed at "Let The Citizen Know" press conference held at the Electoral Commission office in Accra, Monday.

Addressing the media, Electoral Commission Chairperson, Madam Jean Mensa said individuals or parties need to deposit the said amount in a form of a bankers draft to the Commission after downloading, filling and submitting their forms within 5 days.

She said the forms can be accessed on the EC's website https://ec.gov.gh/political-parties/

"Forms will be available to all political parties from 6pm today," she said.

Independent candidates will also be issued with unique passwords.

The Commission will receive the filled out nomination forms from the Presidential and Parliamentary candidates from Monday, 5th October to Friday, 9th October, 2020. The forms will be recieved between the hours of 9am and 12noon, and 2pm and 5pm each day.

The forms can be submitted by duplicates.

The nomination forms for Presidential Candidates will be submitted to the Chairperson of the Electoral Commission at the headquarters of the EC and Parliamentary Candidates will have to submit their forms at their District offices where they seek election.

For the first time in the country's electoral history, aspirants in this year’s presidential and parliamentary elections will not physically pick nomination forms from the offices of the Electoral Commission (EC).

This is because the commission has decided to open the filing of nominations using its online portal.

The move was part of the safety protocols for curbing the spread of the coronavirus disease (COVID-19).

"The nomination forms will be made available on our website and so candidates no longer have to come to pick up their forms at our offices before filing; they simply have to visit our websites and download them,” she said.

Additionally, she said, the guidelines for nominations would be available on the EC's website for political parties and candidates to access.

Per Ghana's electoral laws, aspirants seeking to contest parliamentary and presidential elections are required to file their nominations with the EC.

Over the years, the practice has been that aspirants or their representatives visit the offices of the EC at the district, regional or national levels to pick the nomination forms, which are completed and filed at a later date.

The atmosphere on such occasions is usually charged, as they are characterised by drumming, singing, dancing and sloganeering.

The latest move by the EC is a departure from the old order and implies that the euphoria and colour that come with the picking and filing of nomination forms will be absent.