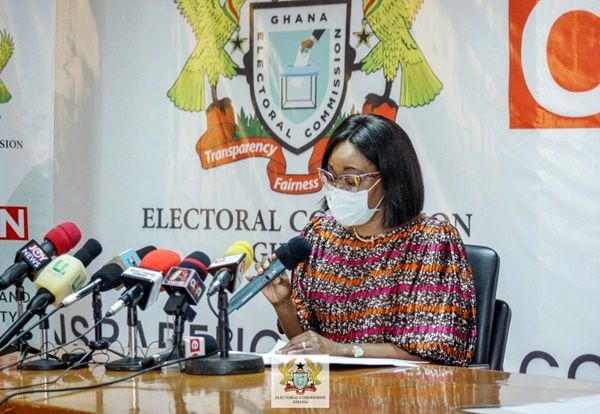 Chairperson of the Electoral Commission, Mrs Jean Mensa has asked naysayers of the Electoral Management Body to cease their onslaught of trying to discredit a thorough and credible electoral process and a Commission which has been open and transparent in all its dealings.

She said during a press conference on Monday to update the public on the just ended filing of nominations by Presidential Aspirants who wish to contest the December 7th 2020 Elections.

“If for nothing at all, the current Commission has opened up all its processes to the public and removed the cloaks of secrecy that shrouded its activities and operations,” she said.

“Today the number of persons who registered by District, Region as well as the sex and age is known to any interested citizen. It is no longer secret. Again the challenges encountered during the Exhibition Exercise were discussed openly by the Commission, solved in a timely manner and reported upon promptly. Constituencies such as Ashaiman which had some gaps in data have all their issues resolved. Just last week, we opened our doors to enable citizens observe the filing of Nominations by Aspiring Presidential Candidates. Through our media partners we have brought our processes and operations to every home. We have been transparent in all our dealings and intend to remain so,” she added.

Five (5) Presidential aspirants have been disqualified from the 7th December 2020 polls by the Electoral Commission.

She mentioned that the filing fees of One Hundred Thousand Ghana Cedis (GHC100,000) will be refunded to all the disqualified aspirants.

Candidates Cleared To Contest In The 2020 Presidential Election

Mrs Jean Mensa wished all the qualifying Candidates the best of luck in their bid to ascend the high office of the Presidency.

The Commission urged all aspirants to engage in a decent campaign – a campaign based on policies and programs that will lead to the betterment of our society.

In a related development, all presidential aspirants who forged signatures and submitted fake documents in the filing process will be investigated by the CID of the Ghana Police Service.

According to the EC, most of the aspirants in their nomination forms forged signatures of some persons who allegedly endorsed them.

EC has no power to determine who wins

She said as referees, their role is to arrange and organize orderly, fair, transparent, peaceful and credible election.

"We assure you that we are working to do just that.

"The citizens and the citizens alone can determine who should lead them – Not the Electoral Commission,” she said.