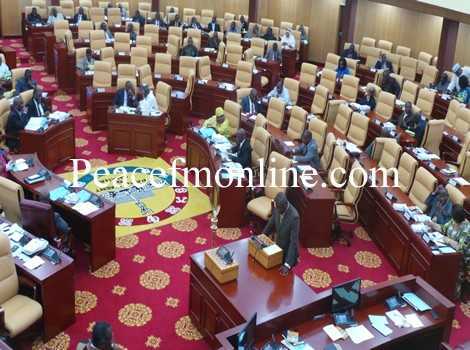 The Parliament of Ghana is positioning itself to monitor Ghana’s performance in implementing the Sustainable Development Goals (SDGs).

The SDGs, also called the Global Goals are a collection of 17 global goals designed to be a "blueprint to achieve a better and more sustainable future for all."

Set in 2015 by the United Nations General Assembly, the SDGs are intended to be achieved by 2030 and are part of UN Resolution 70/1, the 2030 Agenda; a universal call to action to end poverty, protect the planet and ensure that all people enjoy peace and prosperity by 2030.

Professor Aaron Mike Oquaye, on Wednesday directed the House to establish a seven-member Ad Hoc Committee, to be charged with the responsibility to monitor Ghana’s progress in implementing the SDGs, following a statement by Minority Leader and MP for Tamale South on “the Sustainable Development Goals and a Call on Parliament to Set up an Oversight Committee on the SDGs to Advocate Greater Action”, and contributions made by some members of the House.

The parliamentary Ad-hoc Committee to be set up would also monitor progress reports from implementing Ministries, Departments and Agencies (MDAs) and advise Parliament on budgetary allocations and other appropriate interventions to ensure that the Government was on track in implementing the SDGs.

The Committee is charged to also work with the Minister for Planning, the National Development Planning Commission (NDPC), the United Nations Development Programme (UNDP), Civil Society Organisations (CSOs) and other relevant MDAs and stakeholders in pursuit of the SDGs.

In the statement, the Minority Leader recalled the appointment of former President John Mahama by then UN Secretary-General as co-chair of the Group of Eminent Associates for the 2030 Agenda, and the succession by current President Nana Akufo Addo, who co-chairs the Group with the Norwegian Prime Minister Erna Solberg reflects the continued trust the UN has in Ghana to play a lead role in the attainment of the SDGs.

Mr Iddrisu noted 2001 to 2015 Report of the Millennium Development Goals (MDGs), the successor to the SDGs stated that Ghana’s progress on the MDGs was mixed; and explained that the Report showed Ghana achieved some of the targets such as halving extreme poverty, halving the proportion of people without access to safe drinking water, attaining universal education and gender parity in primary school but missed targets such as full and productive employment, women’s involvement in governance and reducing maternal mortality among others.

Mr Iddrisu described the SDGs as people-centered, and therefore MPs, as representatives of the people MPs cannot afford to stand on the fence, but rather play a leading role in ensuring that Government delivers on the SGDs for the benefit of the citizenry and humanity.

The Speaker accordingly directed the House to establish the Seven-Member Ad Hoc Committee to work on the matter.
He suggested that preference in the choice of the Seven Members should not be Leaders, but rather Members in the House who would be devoted to this onerous duty and submit their report to Leadership in good time.

The Committee, he said, should look at every thematic approach because there is overlap in the number of ministerial areas and tasked them to invite the relevant persons at any particular time and liaise with the sector Minister.

Furthermore, they should make available their report to the House so that Members can have a very co-operative approach to the matter.

The Speaker called on Government to play a positive role in the process of implementing the Committee’s Report and assist in the development of assessment factors that would enable the House to measure the progress and deficit of the SDGs to make appropriate recommendations.