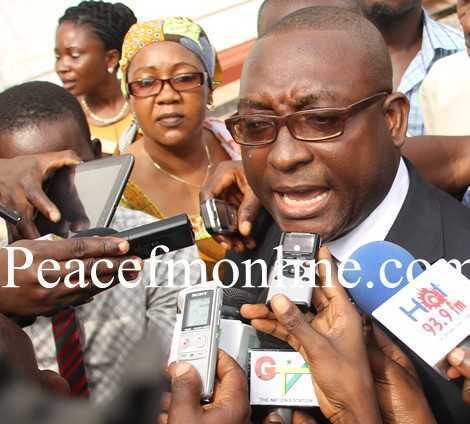 Director of Communications for the ruling New Patriotic Party (NPP), Lawyer Yaw Buaben Asamoah, has slammed Dr Nyaho Nyaho-Tamakloe for his "if he (Akufo-Addo) doesn't take care, there'll be civil unrest" comment, saying the latter's remark is clearly borne out of bitterness.

According to him, since Nyaho-Tamakloe's defeat in his bid to be the Greater Accra Regional Chairman, he (Nyaho) has vowed to work against and speak ill of the current administration; a party he claims to be one of its founding members.

Dr. Nyaho-Tamakloe’s outburst comes on the back of the recent documentary by investigative journalist, Manasseh Azure Awuni, which exposed Chief Executive Officer (CEO) of the Public Procurement Authority (PPA), Adjenim Boateng Adjei for alleged conflict of interest and corruption.

The NPP stalwart viciously lambasted President Akufo-Addo over the spate of corruption allegations in his government.

Describing the President's posture towards allegations of corruption leveled against his appointees as worrying, Dr. Nyaho-Tamakloe said President Akufo-Ado has the worst record in the history of Ghana.

The former Chairman of the Ghana Football Association warned that if care is not taken, citizens will rise up and revolt against the Akufo-Addo led administration.

"The level of corruption under Akufo Addo's government is the worst ever in the history of Ghana and if he doesn't take care, there'll be civil unrest under his leadership just like the revolution that happened in the North of Africa," he said..

But in a sharp riposte, the NPP Communications Director who is also the MP for Adentan Constituency, speaking on Okay FM’s Ade Akye Abia Morning Show, wondered the basis for Dr Nyho-Tamakloe's comments which he described as unfortunate.

“I believe that he is speaking out of envy and we don’t do politics out of envy. That is never done.

“On what basis is he talking about civil unrest when the Akufo-Addo government is cleaning the banking sector of corruption which the NDC left behind and couldn't have the temerity to tackle? And on what basis is he calling for civil war when the bauxite which the family of Mahama nearly took over has been stopped by the Supreme Court and given back to the state?”

“What is wrong with Nana Addo setting up the office of the Special Prosecutor to deal with the corruption cases involving government officials and the person in charge is not someone whom Nana Addo can manipulate? Is that the reason why he is calling for civil war in the country?”

“....If it is on the basis of the PPA issue which is why he is calling for civil unrest, why didn’t he advise Mahama to sack Dzifa Attivor but asked her to resign following the bus branding scandal? ....i guess Nyaho-Tamakloe did not see anything wrong with it...

“Why is he not calling for civil unrest against those who facilitated in the payment of illegal judgment debt paid to Woyome?” he inquired.

To the NPP Director of Communications, “Dr. Nyaho supported those corrupt practices under Mahama because the former President is his nephew and he knows what he stands to and is benefiting from him, thus his call for civil unrest under President Akufo-Addo”.