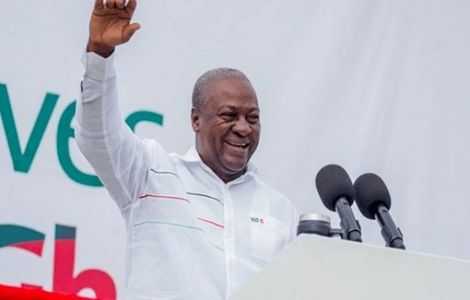 'He had more resources within his reach, much more than any other President under the fourth republic has ever had, but he made the worst decisions and wasted them completely', this is the stance of Founder of the Danquah Institute, Gabby Asare Otchere-Darko on the leadership of Former President, John Dramani Mahama.

Mr. Otchere Darko, touching on Mr. Mahama’s chances at winning the hearts of Ghanaians for another term said it will be an onerous task, considering he left a dented legacy and a lot of ‘mess’ for the next administration to work on.

He was the most blessed president ever in this country’s history… by the time he took over, we were just a year or so in an oil producer, cocoa prices were good, Ghana had really not much of a debt… but what did he do, he wasted the opportunity.”

“And they borrowed more than any other government in the history of this country,” he added.

According to him, Mahama may struggle with a message to convince Ghanaians to earn their votes in 2020 though he qualifies as the party’s best candidate.

“This is a candidate who registered the biggest defeat in Ghana’s history as an incumbent but he is the most marketable… he has the wherewithal and he’s been marketed but what will be his message in 2020”.

“When you look at all the research it tells you that the main opposition candidate is not rising but clearly it appears that there is something about his record which I’m not too sure so I really wonder what his message [will be].”