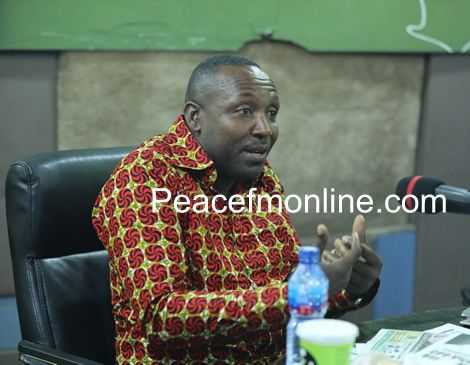 General Secretary of the New Patriotic Party, Mr. John Boadu has described the National Democratic Congress (NDC's) position on the upcoming December referendum as symptomatic of a factious party.

According to him, they are "double-faced and have a proclivity to indulge in deliberate deceptiveness".

Speaking on Okay FM’s Ade Akye Abia program, he dismissed reports of division within the ruling party on the election of MMDCEs saying the NPP still stands by its earlier decision, unlike the National Democratic Congress.

"...the report of division over the election of MMDCEs was false...those who made that report have apologized to me in person over their falsehood.

"Though am disappointed in the position of the NDC, I am not surprised at all because they do not wish the country well. But I pray that they will find common ground with us and support the referendum," he added.

The opposition National Democratic Congress (NDC), earlier this week asked Ghanaians to vote against the proposed amendment of Article 55 (3) of the 1992 Constitution which will make local government elections partisan.

Article 55 (3) states that “subject to the provisions of this article, a political party is free to participate in shaping the political will of the people, to disseminate information on political ideas, social and economic programmes of a national character and sponsor candidates for elections to any public office other than to District Assemblies or lower local government units.’’

The referendum has become necessary because Article 55 is an entrenched provision of the Constitution and therefore can only be amended through a referendum.

Voting for the proposed amendment has been scheduled for December 17, but the NDC is against it.

At a press conference on Tuesday, Chairman of the party, Samuel Ofosu Ampofo said the local government system should remain non-partisan and that individuals should contest the District Assembly and Unit Committee elections on their own merit.