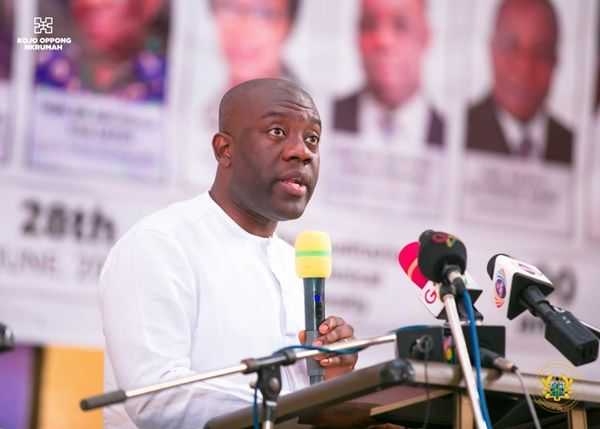 The Member of Parliament for Ofoase Ayirebi, Mr Kojo Oppong Nkrumah, has said the opposition National Democratic Congress (NDC) is known for criticising government policies without providing alternatives or suggestions.

He said it is, therefore, not surprising when people refer to the NDC as an "empty" or "scary" alternative.

Speaking in Parliament while debating the 2020 budget which was presented by Finance Minister Ken Ofori-Atta on Wednesday, 13 November 2019, the legislator said: “You hardly hear of any alternative that our colleagues from the other side come up with; what are the alternatives that you have that can possibly translate the macro gains that we have encountered into micro benefits? And it is because they often are not able to come up with an alternative that is why you hear people saying that the alternative may either be empty or scary”.

The Information Minister explained that the government has deliberately targeted sectors of the economy with specific interventions which are yielding dividend for Ghanaians.

Mr Nkrumah said the Nation Builders Corps (NaBCo) has provided jobs for close to 100,000 people while in education, the government has introduced the Free Senior High School, which has ensured that over 1.2 million students have access to second-cycle institutions across the country.

Talking about industry growth, Mr Nkrumah noted that: “Overall, industry was growing at 4.3 per cent when the NDC was exiting. Today, we are happy to remind the people of Ghana that industry is recording 8.8 per cent growth”, adding: “Mr Speaker, when we rolled out the 1District-1Factory programme, that flagship programme, in addition to the stimulus package is beginning to bear fruits.”