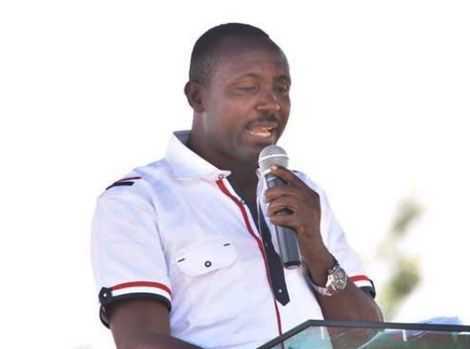 The NPP stalwart was surprised to hear the Chief scribe of the opposition party say "there was never a consensus on the referendum", and that there was also "no meeting between them (NDC) and the president HE Nana Addo Dankwah Akufo Addo at the Jubilee House".

He has therefore vowed to make public footage of the said meeting.

Mr. Asiedu Nketia, had in an earlier interview on Okay Fm's Ade Akye Abia Programme, dared the NPP to provide footage of the supposed meeting with the president at the Jubilee House.

No Consensus; Prez Is A Liar

He openly branded the President, H.E Nana Addo Dankwah Akufo "a liar" for the latter's comments during a recent national broadcast about a supposed meeting to discuss the referendum.

According to the NDC Chief Scribe, he was surprised to hear the President say, the NDC had met with him to discuss the referendum and had indicated its intention to vote and campaign for YES.

"if the President has found sense and reasoning in their argument against the referendum and has finally withdrawn it, he should stick to his position rather than attacking the NDC unnecessarily....

"There was never a national consensus or discussion on the referendum as the President wants to put it. Of course, you may have met with our flagbearer and former president, John Dramani Mahama for about thirty (30) minutes or so but that does not mean there was a consensus on the referendum," Asiedu Nketia fumed.

But speaking on the same platform, a shocked John Boadu expressed sadness for the state of the country’s democracy.

"As a country, if we all want to go this way without thinking of our national interest, the country will never move forward...

"The National Democratic Congress and its leadership should bow their heads in shame. If the NDC scribe wants us to provide video evidence of his meeting with the former president, we will not hesitate to do so because their current disposition on this referendum smacks of betrayal," he said.

Clearly bemused by the opposition party's current position on the referendum, he described them as "not true democrats".

"For the NDC to say that introducing multiparty contests to the local government level would make governance at that level tainted by conflict, we say to them that they are not true democrats. They are not serious.

"This is because, currently elections of both parliamentary and presidential candidates are contested fiercely in all the 30,000 odd polling stations across the country, where all other elections are also held. In fact, we believe rather than introducing multipartism to local assemblies is what will improve the quality of politics at that level," he said.

According to Mr John Boadu, "it would have tackled the winner-takes-all syndrome. It would mean that for those at the grassroots, NPP and NDC would not only react at that level in contesting for votes but for cooperation in how their communities are governed".

"We see daily how MPs on both sides work together to pass bills, budgets, etc.  They eat together, laugh together, work together and still argue healthily among themselves and take strong party lines where they have to without turning violent. This is what Akufo-Addo and the NPP want to spread to the ground," he explained.