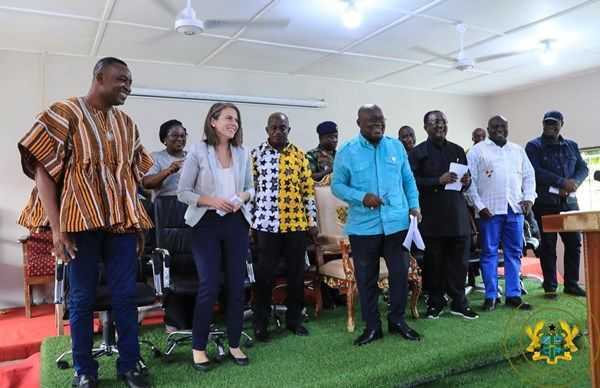 By calling off the 17th December Referendum, it translates into more years in opposition for the National Democratic Congress, the Ashanti Regional Chairman of the New Patriotic Party has said.

Mr. Bernard Antwi-Boasiako claims that the NPP multiplied their stay in power by having a visionary leader who saw the essence in calling off the intended Referendum.

According to Mr. Antwi-Boasiako popularly known as Chairman Wontumi, President Akufo-Addo’s decision to call off the exercise is perfect and positions the NPP as a party that listens to the general concerns of Ghanaians.

“I am grateful President Akufo-Addo in his wisdom called off the 17th December Referendum. The decision means that the NDC would spend more years in opposition and the NPP would stay in power for more years”, Chairman Wontumi said.

The President of the Republic, Nana Addo Dankwa Akufo-Addo, has called off the holding of the Referendum of 17th December, 2019, citing the lack of a broad, national consensus amongst key stakeholders and the populace.

President Akufo-Addo has, thus, instructed the Minister for Local Government and Rural Development, Hon. Hajia Alima Mahama, MP, who is spearheading the process, on behalf of government, to abort the process, and see to the withdrawal of the bills for the amendment of the Constitution, both in respect of article 243(1) and article 55(3).

Addressing the nation on Sunday, 1st December, 2019, the President indicated the attainment of a broad consensus, for him, on a matter as important as the amendment of an entrenched provision of the Constitution, is critical.

“I do not believe that such an amendment should be driven as a party matter. There has to be a clear national consensus and agreement amongst the populace that a particular entrenched provision no longer serves the interest of the people, and, thus, has to be removed,” he said.