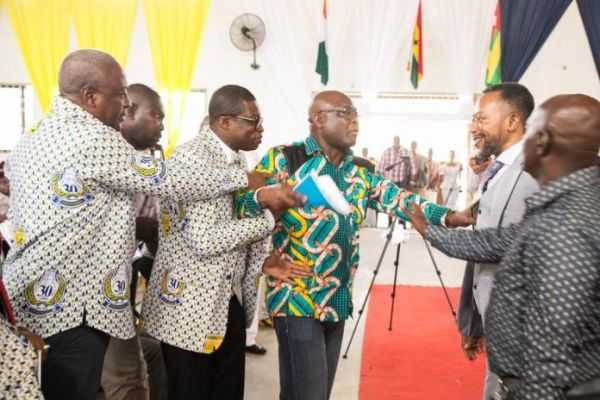 Controversial Prophet, Rev. Isaac Owusu Bempah has revealed that it was only the grace of God that allowed him to shake hands with ex-President Mahama on Sunday, in the face of resistance by members of the pro-opposition NDC party militia group, the Hawks.

The Hawks, reportedly caused a scene and disrupted church service at the Holy Ghost Revival Center of the Assemblies of God Church, South Odorkor, Accra on Sunday 1st December, when they physically tried to stop him from exchanging pleasantries with Mr Mahama.

Both Mahama and Rev. Bempah had been invited by the Church to grace their 30th Anniversary.

The incident happened when Rev Bempah, who had to leave earlier because he had to go and preach at his own church, was asked by the Host Pastor to exchange pleasantries with the guests who were present.

Before he got to Mr. Mahama, the latter’s host of bodyguards following him decided to stop and attack the Man of God. This brought confusion and the Congregation got upset.

After about five minutes of disruption, the congregation’s disapproval of the incident reportedly forced Mahama to shake hands with Rev. Bempah.

Narrating the incident to his congregation when he got to his own church, Rev. Owusu Bempah who’s the Founder of the Glorious Word and Power Ministries International said: “...So the Pastor led me and just as I approached ex-President Mahama he stood up and just as I was about to shake hands with him, one of his bodyguards prevented me from shaking hands with him. But the ex-President rebuked him, and he said Reverend come and greet me and he shook hands with me. If grace allows you to come, sin cannot stop you.”

Mahama at church where he 'clashed' with Owusu Bempah
Drama unfolded at the 30th Anniversary celebrations of the Holy Ghost Revival Centre, Assemblies of God Church in Accra when Rev. Owusu Bempah tried to extend greetings to former President John Dramani Mahama, who was the special guest of honour.