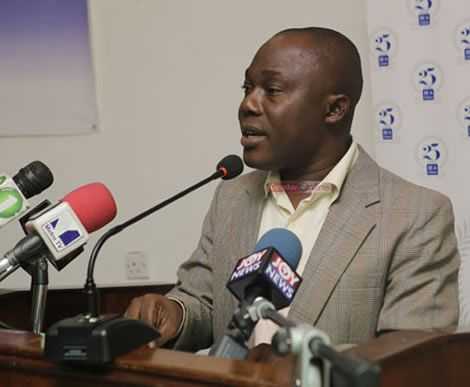 The Head of European Studies of the University of Ghana (UG), Prof Ransford Gyampo, has waded into the ongoing debate over the suspension of the 17 December 2019 referendum.

President Nana Addo Dankwa Akufo-Addo, in a televised address to the nation on Sunday, 1 December 2019, called off the referendum citing the lack of a broad national consensus among key stakeholders and the populace.

Mr Akufo-Addo, thus, instructed the Minister of Local Government and Rural Development, Hajia Alima Mahama, who is spearheading the process, on behalf of government, to abort the process, and see to the withdrawal of the bills for the amendment of the Constitution, both in respect of Article 243(1) and Article 55(3).

Prof Gyampo said in an article that there are potential benefits and risks in electing MMDCEs without political parties and, therefore, it is erroneous for anyone to ignore both sides of the coin.

In the Facebook epistle, the lecturer made a case for and against the motion in order to educate Ghanaians on the matter.

Below is Prof Gyampo’s full write-up:

As you may be aware, I have been quiet for some time just to be able to submit myself to the internal processes of my University on the recent allegation made against me. I intend to remain silent until the processes are over. I however want to plead with all well-wishers who have counseled me to be quiet for a while, to allow me to offer a little education just for God and country. Afterwards, I will be quiet even as I go through my University’s processes.

I worked with the Institute for Democratic Governance (IDEG) for a year and with my teachers like Prof Atsu Ayee and Mr Kwesi Jonah on the key issues of the now aborted referendum. I have therefore read and observed with keen interest the various arguments for and against the amendment of article 55(3), that seeks to allow partisan local level elections.

Given that the processes towards the referendum have been put on hold for now, I wouldn’t want to go into the proposal at this time. I rather want to address to those who argue that the way to go, is simply to allow the election of MMDCEs without political parties participating in the process.

In my view, electing MMDCEs without parties cannot be a full-proof of anything. It has benefits but has its serious dangers too. Just as there are two sides to a coin, I want to borrow from the earlier works of Prof Ayee, Mr Jonah and those I undertook myself at the IDEG to present the two sides of the coin.

There are potential benefits associated with the election of MMDCEs without political parties. First, it permits candidates of the same party to stand against each other.

Second, in party politics, proposals tend to be formed in party meetings rather than in open local government council. True debate can be stifled by the presence of party whips, thus depriving the leadership of public ideas and opinions of merit.

Third, electing MMDCEs without political parties may not be characterized by polarization and tension that have engulfed the nation in the lead up to multiparty national elections.

Fourth, a directly elected MMDCEs is not dependent on his local political party for his election or appointment and therefore cannot be dismissed by that group.

Fifth, a non-party based decentralized local governance is not expensive as a common platform is mounted by the Electoral Commission for the candidates at its own expense.

Sixth, electing MMDCEs without political parties may likely avoid the tension, division and treating usually associated with partisan elections at the national level.

First, it will increase the role of financiers with their own agenda at the local level to sponsor candidates of their choice, manipulate them to push agendas that may run contrary to the interest of the local people and the programmes of the central government, as well as subject the elected MMDCEs to all manner of corrupting influences and practices. Indeed, there would be over 1,300 candidates, that is, at least 5 candidates in each of the 260 districts who may contest the elections not on party basis and with different agendas. There is no blueprint as to who will supervise these candidates and there has not been any serious thinking about how the elected MMDCE via this option would relate with the central government. There is the possibility of serious sabotage and more confusion between the central government and the elected MMDCE with no known political affiliation, who may either be independent or be manipulated by money bags with a quid pro quo agenda in mind.

Second, it will perpetuate the winner-takes-all politics as minority political parties, which have lost national elections, are excluded and marginalized from the executive arm of government at the local level as is currently the practice. By way of illustration, Kenya represents a classic case in Africa where the feeling of marginalization is so high after elections. However, the introduction of the participation of political parties in local government elections has reduced the politics of exclusion and compensated for the painful defeat of the opposition at national election, particularly in their strongholds. Even though the minority parties lost in 2013 and 2017 at the national level, they won at the County level and therefore have access to executive power.

Being part of the Counties has enabled the minority parties to contribute their quota to local development and improved delivery of public services.

Third, it will not eliminate the current unconstitutional and secret sponsorship of political parties for candidates contesting district level elections. If nothing else, electing MMDCEs without political parties will make it worse as the erroneous impression will be created and propaganda circulated that there is a constitutional amendment that allows MMDCEs to be elected along multiparty lines especially when the public has not been adequately sensitized on the issues.

Fourth, it will not improve the quality of political leadership at the local level (MMDCEs and members of MMDAs) which has suffered in the current system. If nothing else, the candidate with money has a greater chance of being elected than one with no money but qualified in terms of competence and experience. In a multi-party local governance system, there is the greater likelihood of the political parties through the structures to act as “sieves” to produce competent and experienced candidates as they are competing among themselves.

Fifth, electing MMDCEs without parties will not resolve the current conflict between Members of Parliament (MPs) and MMDCEs, who have been scheming in the absence of the MPs while busy performing their legislation responsibilities. This situation has led to insecurity as some MPs have not been able to use the time profitably on their core mandates (law- making, representation and oversight) but rather tended to be more preoccupied with retaining their seats in Parliament. The conflict between some MPs and MMDCEs is counterproductive and in some cases has led to institutional paralysis at the local level and affected the performance of some MPs and MMDCEs as well as affecting in a negative way institutional memory in Parliament – a development to which both the majority and minority leaders have complained about.

Sixth, it will lead to chaos and indiscipline at the local level as the current role of the President and the Regional Coordinating Council (RCC) in monitoring and coordination will be weakened. In fact, those elected will literally be reporting to their financiers who will be calling the shots. This might lead to an institutional paralysis of some of the Metropolitan, Metropolitan and District Assemblies.

Last, but not least, electing MMDCEs without political parties will be contrary to the logic of the practice of multi-party politics at the national level while the local level which is expected to be the training ground for future national leaders is practicing an opposite system which does not contribute to the ideals of democratic governance.

In conclusion, it is noteworthy that there are potential benefits and risks in electing MMDCEs without political parties. It is, therefore erroneous for anyone to ignore both sides of the coin.

I have done this in the hope that there will be some more information to determine which way to go, should the debate on election of MMDCEs with or without political parties be resurrected.