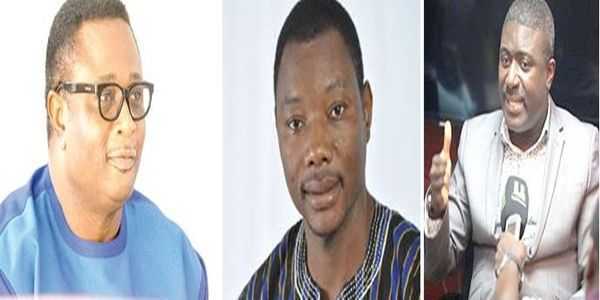 Two leading members of the Inter-Party Resistance Against a New Voters’ Register (IPRNA) have welcomed the decision of the Electoral Commission (EC) to engage the political parties opposed to the compilation of a new voters register ahead of the 2020 general election.

The two, Mr Elvis Afriyie Ankrah, Director of Elections of the National Democratic Congress (NDC) and Mr Bernard Mornah, the Chairman of the People’s National Convention (PNC), however, said the EC knew the channels and processes in engaging the political parties.

That, they explained, was not done on radio or television.

They were responding to a statement by the Deputy Chairperson of the EC, Dr Eric Bossman Asare to the effect that the EC was always open to discussions with the various political parties with regard to the new electoral register.

“As far as the EC is concerned, our doors are open. We will still engage the parties. Very soon, we will have an IPAC meeting to call on the parties for us to look at the modalities; how we are going to do it. So we wish that all the parties will come on board. If there are certain ways we can do certain things to mitigate the concerns of others, the EC is ready to do that,” Dr Asare stated in an interview on the Point of View on Citi TV.

Mr Afriyie Ankrah said the NDC and the other parties were willing and ready to meet with the EC but that it must be done appropriately.

He explained that because of the willingness of the NDC to engage the EC, the party wrote to the EC on December 5, 2019, requesting the report and cost analysis that informed its (EC) decision to compile a new voters register.

Regrettably, he said, the EC had not even acknowledged that letter nor responded to it.

He said if the EC was willing to engage, it must demonstrate it in word and deed.

For his part, Mr Mornah said: “If the EC is willing to engage us now, we will not hesitate to meet with them.”

He said it was the collective responsibility of all the stakeholders to ensure peace and a transparent roll for the elections.

Mr Mornah said the EC must also come clear on what type of engagement it wants with the political parties opposed to the compilation of a new register.

“Will it be one-on-one or at the Inter-Party Advisory Committee (IPAC) level,” he asked.

Mr Mornah said the issue would not have gotten this far had the EC been willing to engage the political parties from the onset.

Parliament has approved about GH¢390 million for the EC to procure a new biometric system which has facial recognition technology and also compile a new voters register this year.

The EC had explained that the existing biometric system was outmoded and expensive to maintain, hence the need to go in for a new one at a cheaper rate.

Six opposition political parties joined forces to declare their resistance to the EC's decision to compile a new register for this year's general election.

In the view of the NDC, the PNC, the All People's Congress (APC), the United Front Party (UFP), the United Progressive Party (UPP) and the Egle Party, the move by the EC was not only a drain on the national coffers, but also a threat to peaceful elections.

At a news conference in Accra recently, the parties, which constituted themselves into a coalition dubbed ‘Inter-party Resistance Against the New Voters Register (IPRAN)’, indicated their resolve to stage demonstrations across the country to back their demand.

It will be followed by similar actions in Kumasi and Accra on January 21 and January 28, respectively.

The coalition also declared that it would resort to scheduled picketing and other actions to court public support to compel the EC to drop the idea of a new register.

The parties, under the umbrella of the Coalition of Political Parties for ‘YES’ to a new register, believe the EC has made a solid case for a new register in terms of cost, time and credibility.

At a press conference in Accra yesterday to state their case, the Spokesperson for the parties and Leader of the Liberal Party of Ghana (LPG), Mr Kofi Apaloo, said: “We are a coalition of political parties for ‘YES’ to a new register because the justification for the new register by the EC is very clear.”

The other parties which are in favour of the EC’s compilation of a new voters register and represented at the press conference were the ruling New Patriotic Party led by Mr John Boadu, its General Secretary; the LPG, represented by Mr Apaloo, and the People’s National Convention (PNC), represented by Mr Haruna Asante.