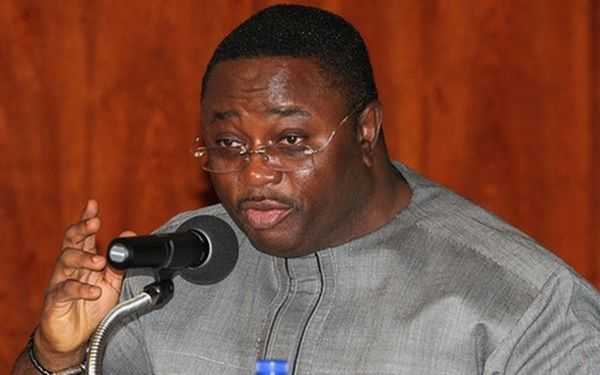 The Director of Elections of the National Democratic Congress (NDC), Mr Elvis Afriyie Ankrah, has said the  posture of the Electoral Commission (EC) on the compilation of a new biometric voters register is inimical to the country’s peace and democratic development.

He said the EC, by its stance, had also showed disrespect to the commission’s Eminent Advisory Committee, the Asantehene, Otumfuo Osei Tutu II, and other well-meaning Ghanaians who had agreed to mediate in the disagreement over the compilation of a new biometric voters register.

Reacting to the timelines set by the EC for the compilation of the register, Mr Afriyie Ankrah, whose party belongs to the Inter-party Resistance Against  the New Voters Register, explained that the group’s decision to suspend its demonstrations and other planned activities was to show respect to the personalities involved in the mediation.

He gave an assurance that it would resume and escalate its planned activities to compel the EC to listen to reason if the mediation failed.

He said Ghana’s democracy was the envy of many in the world and Africa and the EC must be mindful not to plunge the country into chaos.

Mr Afriyie Ankrah said the EC had so far failed to advance any cogent arguments to justify its decision to procure a new biometric voter management system (BVMS) and compile a new voters register.

He said for 18 respectable civil society organisations (CSOs) and other experts to shoot down the EC’s reasons for the new register showed that the commission had no basis.

“What is the EC’s motivation for insisting on pursuing the same path that others had kicked against?” he asked.

“It is a procurement scam. After all, the EC just procured more of the devices for the referendum on the creation of new regions, as well as the district level elections in December, last year,” he added.

Mr Afriyie Ankrah said it was not possible for the EC to compile the new register in six weeks, as it had outlined, especially when the National Identification Authority (NIA) had taken more than a year to register only 7.2 million, with about half of those registered yet to receive their cards.

“Where is its projection coming from?” he asked.

He reminded the EC that voter registration had a history of creating more tension in the country than even voting day, hence the need for the commission to tread cautiously.

In response to the question as to why the coalition would not encourage its members to register, he said the wastage involved in undertaking the exercise, as well as the timing, should not be countenanced by any reasonable Ghanaian.

Mr Afriyie Ankrah asked the EC to rethink its argument of independence, since the same Constitution reminded the independent institutions about the need for their actions to be reasonable.

“The EC must seek to build consensus and not take a posture that is not good for our democracy. Truth is one,” he said.

He said there was trouble in neighbouring countries all based on electoral issues and said the EC must be mindful of that and help Ghana preserve its image as an oasis of peace.

The EC has fixed April 18, this year for the commencement of the compilation of a new voters register, with the hope of completing the exercise by May 30, 2020.

But the Inter-Party Resistance Against the New Voters Register is opposed to the plan to compile a new register, citing cost, time and credibility as the bases for its opposition.

After demonstrations in Tamale on January 11 and Kumasi on January 21, 2020, the group has decided to suspend its planned nationwide protests until it meets with the Eminent Advisory Committee of the EC on the matter.

The group was scheduled to hold another demonstration in Accra on January 28, 2020.

Eighteen CSOs have also registered their opposition to the decision of the EC to compile a new voters register.

They said if there was the need for the collection of fresh data on citizens, “the more appropriate, most lawful and financially responsible and justified approach will be to let the NIA collect and process the information”.

After that, it said, the NIA would then send the EC the subset of information it needed for the purpose of elections.

On the other side, 13 political parties have thrown their weight behind the EC’s decision to compile a new register.

In the estimation of the parties, the EC had made a solid case for a new register in terms of cost, time and credibility, hence their decision to support it to compile the new register.