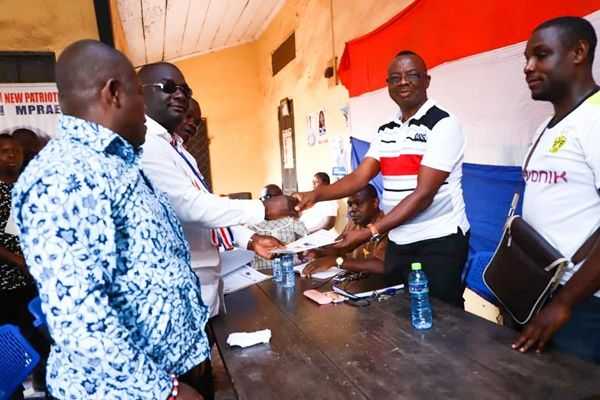 A Public Relations Consultant and long-standing activist of the New Patriotic Party in the Mpraeso Constituency, Mr Davis Opoku Ansah on Friday February 14 filed his nomination to contest in the upcoming Parliamentary primaries of the party.

Speaking to a cross-section of the media and some executives of the party, Mr Ansah, who is popularly known as OPK, assured his constituents of a clean campaign devoid of insult. He called for a united constituency, before, during and after the primaries, saying "We will need everyone to execute the agenda of the NPP in winning a second term."

Touching on his priorities, OPK said, “I have come to contribute in building a Stronger, Prouder and Better Kwahu for all”. He added, “The youth of my constituency deserves a leader who is closer to them and ready to champion their needs.”

Speaking on his advocacy skills, he said, "This is the birthplace of one of the forebears of our Tradition, Dr Joseph Boakye Danquah. His voice, despite all the struggles, was loud in shaping our country, Ghana. I believe I have come at the right time to advocate for my constituents to place Mpraeso on the Political map of Ghana and give my people a voice that is always championing development."

On Friday January 31 a group of Polling station executives in the Mpraeso Constituency led by Dr. Simon Ofori picked nomination forms for Mr Davis Opoku Ansah. Dr. Ofori stressed that “We [delegates] volunteered to pick the forms for OPK to answer the many calls from the voters in our areas”

Mr Ansah, is the Operations Director of the Pro-Government pressure group, Alliance for Accountable Governance (AFAG) and has held a number of positions in the party.

The Mpraeso Constituency elections is expected to be fiercely contested as with the sitting Member of Parliament, Hon. Seth Kwame Acheampong who has occupied the seat since 2009. He succeeded Dr Francis Osafo Mensah, who had occupied the seat 1996 and 2008.

The NPP has slated April 25 for its primaries in constituencies with sitting MPs.