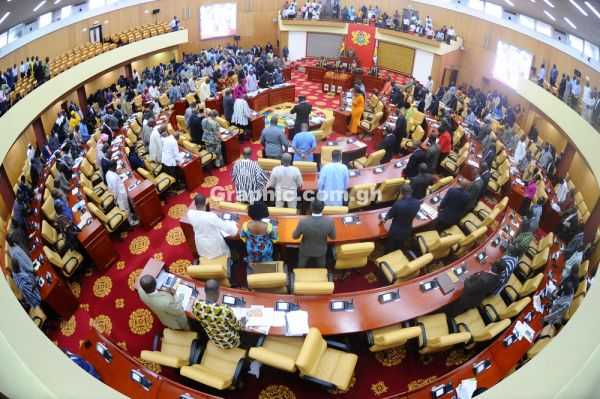 There was a moment of discomfort for the minority in parliament following the line of argument by the majority on the 2020 State of the Nation Address (SONA), compelling the former to break its loud silence not to take part in the debate.

The Minority which had earlier told the House that it would not take part in the debate, had their Chief Whip Alhaji Muntaka Mubarak, breaking that vow on the floor of the House on Tuesday, February 25, 2020.

In his submission, Afenyo-Markin, MP for Effutu, referred to colleagues from the other side, including Dominic Ayine, Okudzeto Ablakwa, Sam George and Muntaka Mubarak among others, questioning the roles they played in what he described as the failed management of the economy under former president Mahama.

He further referred Kwame Agboda, to tell the house if his constituency, Adaklu, was not witnessing development, particular in education. “Can you say so?” Afenyo-Markin quizzed.

The MP, who had spotted the Majority Chief Whip trying to catch the speaker’s eye, told his colleague to talk into the microphone, amidst laughter from other member, with the speaker, giving Muntaka the opportunity to speak.

Having being given the chance, Muntaka said “Mr. Speaker, we have to be responsible in this Chamber. Mr. Speaker, you drew our colleague’s attention that he should not be inviting members.
“He went on calling names after names. He is not being fair to the members and I think you (Afenyo-Markin) have to be responsible,” he said, describing their decision as a political tool in parliamentary process.

Visibly looking angry, Muntaka called on the Speaker to call Afenyo-Markin to order, “other than that, we will be forced to also call name.”

In the chair, the First Deputy Speaker, Joseph Osei-Owusu drew the attention of the Effutu MP to order 93(1) of the standing orders of the House, which states that personal allusions could not be made during debates.

Accepting the direction of the Speaker, Afenyo-Markin pleaded with the speaker to make a determination on Muntaka’s statement that his reference to constituencies and official was irresponsible.

The Minority Chief, however, declined to respond to this application by Afenyo-Markin and the speaker also over rued the application on the basis that the latter was caution earlier and order 93(2) also speaks against personal allusions.

A persistent Afenyo Markin continued his debate that, he did not make personal allusions, stressing that Muntaka took him out of context.