Deputy Agric Minister, Kennedy Osei Nyarko who was listed as a beneficiary of a GETFUND scholarship has said that his position has been vindicated by the Auditor-General, Mr. Daniel Yaw Domelovo.

He says the Auditor-General did no proper auditing when the GETFUND list was handed over to him.

In a short write up, he explained that the Auditor-General has admitted in his response addressed to his Solicitor that the information contained in his audit report is from GETFund.

However, he did not Audit the information supplied him by GETFund.

According to him, in this regard, his position has been vindicated. He says Mr. Domelovo never delved into any document but simply relied on information supplied him by GETfund.

"This is the Auditor-General of the Republic of Ghana," he said.

"The Auditor-General has admitted in his response addressed to my Solicitor that the information contained in his audit report is from Getfund, and that he did not Audit the information supplied to him by Getfund. That indeed he did not demand any supporting documents in respect of any alleged payment".

"That a copy of the audit report was published on its website. His office has no malice or bias towards any individual named from Getfund.

"It is clear from the foregoing that my position has been Vindicated. The Auditor-General did not Audit the information supplied by his office by Getfund. Can this one too be called Proper Audit? Let Ghanaians decide," his short write up added.

Deputy Minister for Agric and Member of Parliament(MP) for Akyem Swedru, Kennedy Osei Nyarko has threatened to sue the Auditor-General, Daniel Domelovo over the publication of his name as a beneficiary of the GET fund scholarship.

Speaking on Okay FM’s 'Ade Akye Abia' programme, he explained that the Auditor-General must have done due diligence before releasing the said beneficiary list.

He stated that he started paying for his foreign school fees way back in 2000 and since then he has had never been a beneficiary of any scholarship scheme.

But replying to the letter, Mr. Domelevo said his office did nothing wrong.

In the Auditor-General's response, he said his office, in consonant with article (187)2 of the 1992 Constitution and Sections 13 (c) and 16 of the Audit Service Act, 2000 (Act 584). undertook a special audit at the GETFund office spanning the period 2012 to 2018 and submitted a copy of the audit report to parliament as mandated by law. 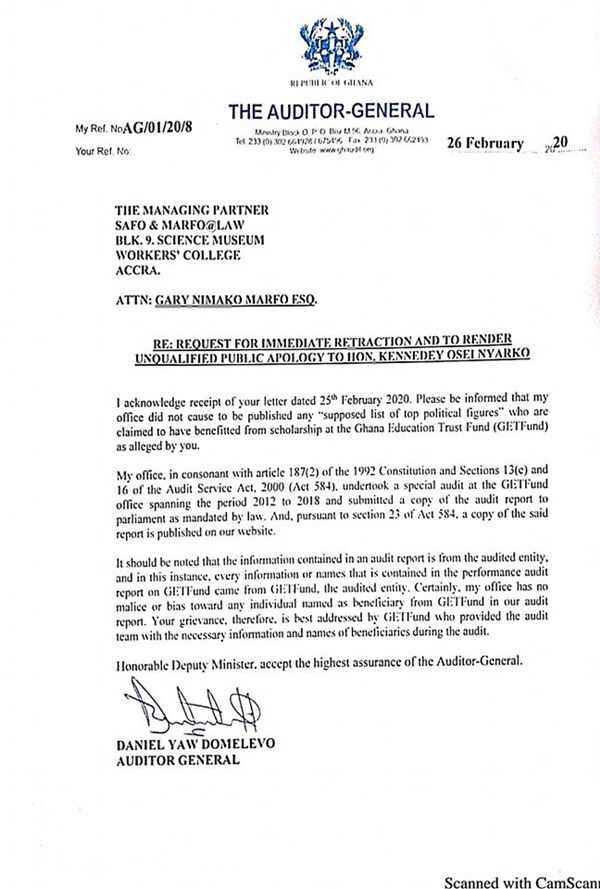