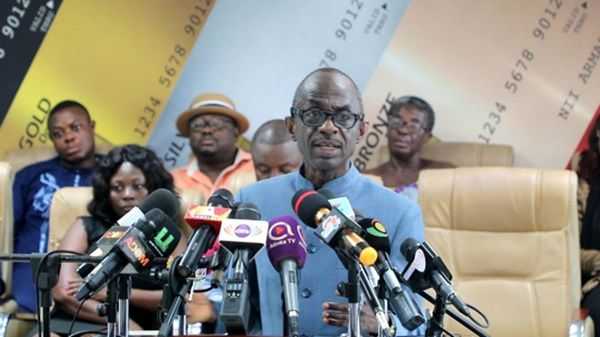 General Secretary of the largest opposition National Democratic Congress (NDC), Johnson Asiedu Nketia has disclosed that the NDC will not withdraw from the 2020 general elections.

However, he says, they will not look on unconcerned to be cheated by the Electoral Commission and the ruling New Patriotic Party (NPP).

Speaking on Okay FM’s 'Ade Akye Abia' programme, he explained that the party is going to apply all means possible to prevent the EC from going ahead with the compilation of a new voters' register.

"The National Democratic Congress will not withdraw from the 2020 general elections, we will take part in the elections and we are also going to ensure our smooth victory," he said.

He added that there’s no iota of truth in the EC's statement in response to their press conference.

"We have engaged the Electoral Commission and they are deliberately planning to disenfranchise eligible voters," he added.

Earlier this week, th EC denied allegations by the NDC that it was conniving with the National Identification Authority (NIA) to rig the upcoming 2020 general elections in favour of the governing party, NPP.

According to the Electoral Commission, their outfit is no position to conspire with any political party or institution as being speculated by the NDC to rig elections, as the electoral processes remain transparent at all levels.

In a press statement signed by the Acting Director of Public Affairs at the EC, Sylvia Annoh, this is just another attempt by the main opposition party, the NDC, to undermine the image and integrity of the institute by "peddling untruths and falsehoods."

The oppositon party had earlier posited that the use of the National Identification card and passport as evidence of identification during registration despite the limited number of Ghanaians who have these requirements, was unfortunate.

But in response, the EC said, the two (National Identification Card and the passport) are essential to aid in the elimination of unqualified names in the register, thus calling for the amendment of the CI 91 which is currently before parliament.

“Further, an applicant who does not have the Ghana Card or Passport may resort to obtaining two (2) guarantors to facilitate their registration and therefore, the exclusion of the Voter ID card as a requirement will not lead to suppression of votes.

“Moreover, the new CI, if passed by parliament, will afford guarantors the opportunity to guarantee for upwards of ten (10) applicants instead of five (5) as stipulated in the current CI. This makes it possible for applicants without Ghana card and passports to also register.”


Listen To Him In Video Below