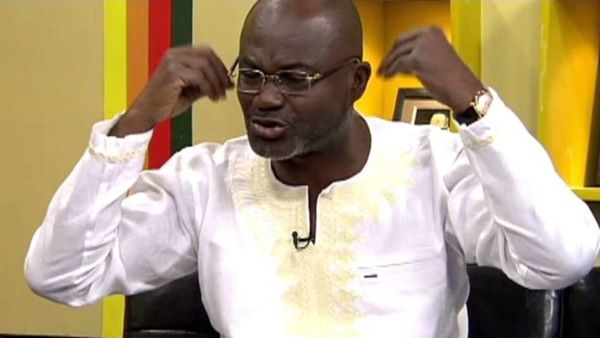 NPP Member of Parliament for Assin Central, Kennedy Agyapong, has said there is no way the country will be thrown into civil war if the Electoral Commission continues to compile a new voters' register amid the coronavirus pandemic.

According to him no one is afraid of Maj. Rtd Osahene Kojo Boakye Djan with his continous constant threats of civil war and anarchy.

" . . We will do the right thing for the country, we will go ahead with the voters' register . . . the NDC is speaking as if they are in power, but they have forgotten that they are not in power . . . we are waiting for them to destroy this country; we are not afraid of them," said Member of Parliament for Assin Central, Kennedy Agyepong.

He was reacting to the controversies surrounding the compilation of a new voters' register and comments by Maj. Rtd Kojo Boakye Djan that there could be civil unrest should the Electoral Commission (EC) continue with the impending voter register compilation.

The Assin Central MP was speaking in an interview with Hello FM in Kumasi.

The former military officer accused the EC of gradually leading the country into a civil war with its bull-headedness, particularly regarding the decision to compile a new voters register.

If They Want Civil War, They Will Get It!

The fomer military capo strongly held that the country can go to the polls this year without resort to putting together a new register as was done in 2016.

Sounding a note of caution, he pointed out that most electoral disputes in Africa have resulted in civil wars and Ghana is not immune to it, and warned that "should the EC continue to toe the line of their paymasters, it will certainly spell doom for this country."

Listen to Kennedy Agyepong in the video below

Earlier this week, th EC denied allegations by the NDC that it was conniving with the National Identification Authority (NIA) to rig the upcoming 2020 general elections in favour of the governing party, NPP.

According to the Electoral Commission, their outfit is no position to conspire with any political party or institution as being speculated by the NDC to rig elections, as the electoral processes remain transparent at all levels.

In a press statement signed by the Acting Director of Public Affairs at the EC, Sylvia Annoh, this is just another attempt by the main opposition party, the NDC, to undermine the image and integrity of the institute by "peddling untruths and falsehoods."

The oppositon party had earlier posited that the use of the National Identification card and passport as evidence of identification during registration despite the limited number of Ghanaians who have these requirements, was unfortunate.